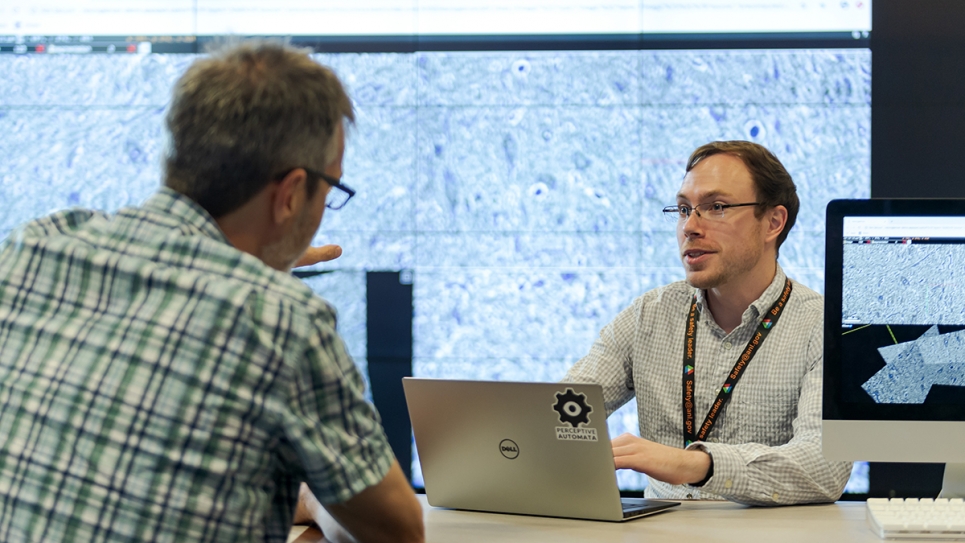 For many students, the summer break means a chance to sleep in, enjoy the sun, and spend a few days at the beach. For the 29 students who spent their summers at the Argonne Leadership Computing Facility (ALCF), a U.S. Department of Energy (DOE) Office of Science User Facility, break meant a chance to embark on scientific endeavors, gaining valuable experience at a world-class research center.

Each summer, students ranging from undergraduates to PhD candidates come to the ALCF to work alongside a mentor—they take on research projects that address important computing problems, from system administration and data analytics to computational science and performance engineering.

“Our summer student program offers a unique experience on multiple levels,” said ALCF Director Michael Papka. “Students are able to see what it is like to work in a national laboratory, but they also get to work closely with experts in their field to solve real-world problems. It’s the kind of experience that can’t be taught in a classroom.”

The summer culminated in special symposiums that allowed students the chance to present on their research projects. Below are brief overviews of how five students spent their summers at the ALCF.

This is just what Kavon Farvardin, PhD student from the University of Chicago, is working to combat. Farvardin returned to the ALCF for a second summer this year, following up on his previous work with real-time auto tuning. Auto tuning usually takes place prior to deployment, but Farvardin is interested in optimizing a program while it is running.

This year, Farvardin has extended his previous work into a new project called HALO (Wholly Adaptive LLVM Optimizer). “The idea is we can try and leverage recent techniques, such as available machine learning libraries, to help model the performance of a system and converge on an optimal configuration in as few steps as possible, yet also do it while the program is running live,” Farvardin said. “Because we’re doing this tuning as the actual production run data is being processed, our tuning is more specific to that workload.”

This concept could benefit a facility like the ALCF, as Farvardin hopes his optimization tool will yield notable performance improvements for high-performance computing applications. ALCF resources were beneficial for Farvardin as well, particularly the community of researchers he was able to work with. “I don’t have heavy-duty computations to work on,” he said, “but I care about making those computations that exist work faster—it was pretty awesome having connections to people who were interested in testing my project on their work.”

After several years with a remote graduate appointment at Argonne, Jeffery Kinnison spent his first summer on site as an ALCF summer student this year. The PhD candidate from the University of Notre Dame continued to participate in an ongoing effort to make scalable computer vision and deep learning tools for processing neuroscientific data.

The team has been utilizing neuroscientific electron microscopy and X-ray data from Argonne’s Advanced Photon Source, a DOE Office of Science User Facility, working to understand how the brain is wired, potentially resulting in enhanced artificial intelligence capabilities or advanced treatment for neurological conditions.

Kinnison has been focusing on preparing tools for processing this X-ray data on future exascale computers, including the ALCF’s Aurora system. “We’re rolling out a couple of different pieces of software on Theta right now as a sort of first pass to prepare for Aurora later down the road,” he said. “I’ve been working specifically on scaling up some software that I wrote for my PhD to be able to process hundreds of gigabytes or petabytes of data in a reasonable amount of time.”

The team has also been exploring the usage of deep learning for neuroscience, looking at how it can help analyze and understand the X-ray and microscopy data available.

Kinnison’s time at the ALCF has helped him realized the scope and applicability of his work. “It seems like every other day my mentor is coming to me and asking ‘Hey, do you think this would be a good fit for a project that this person I know is doing?’” said Kinnison. “The projects often seem unrelated to ours, but we’re starting to find ways that we might be able to contribute a little bit to some of the other work that’s going on. It’s been surprising in a good way to see that what I’m doing is so applicable across different domains.”

Alessandro Buy is a senior data science major at the University of California, Berkeley. He found his time at the ALCF invaluable in helping him gain both experience and direction as he neared graduation; notable was the hands-on and problem-solving experience his ALCF internship allowed—two things not always present in the classroom.

Much of Buy’s research this summer was spent looking into the open-source, cloud computing software Kubernetes, specifically evaluating its capabilities for data-intensive workloads. This software would allow machine learning applications and databases to be deployed across computing resources. “If we could deploy all of these databases with Kubernetes, it would increase the ability to manage and access them from different computers. It would help behind the scenes, as opposed to the straight up coding,” Buy said.

“I think the things I learned can be applied anywhere: you have this problem that you don’t know how to solve and then research and figure out how to get around it and get through it. That’s something that Argonne has taught me a lot so far,” said Buy. He also noted the various skills he was able to develop, ranging from new software to different data science tools. While Buy has yet to decide on his post-graduation plans, his time at the ALCF left him considering a future research position.

Nouman Butt, a PhD student at Syracuse University, spent his summer working to build a quantum computation-based algorithm. This would evaluate tensor networks associated with various statistical and field theoretical models and map them onto quantum mechanical problems. Many of these systems have been studied using classical simulations, but when studied as quantum computations, different information emerges.

Much of Butt’s previous research was on lattice field theories, but in recent months, he shifted to focus on tensor networks, helping inform the work he did at the ALCF. Butt’s tensor network research, specifically on quantum computation, “is the next step toward more generic algorithms that can help realize the novel structure of classical and quantum systems,” he said.

“Many physics problems studied using classical computers are now at a bottleneck. This is an alternative line of research where you can take the same problems and recast them into quantum computation problems, eventually leading us to algorithmic and physics development,” said Butt.

The collaborative environment at the ALCF has proved to be instrumental for the development of this new algorithm. “Sometimes you might not be looking at the problem the correct way, but someone from a totally different field has another perspective,” said Butt. “This combination of people working together can lead to new solutions.”

University of Colorado PhD student Michael Perlin spent some of his time working alongside Butt, studying the use of quantum computers to compute quantities represented by tensor networks. “I focused more specifically on the use of quantum computers for tensor-network-based methods to diagnose phase transitions in condensed matter systems. Things like the transition between magnetized and non-magnetized phases of a magnetic material,” Perlin said. These quantum computers are well suited for handling quantities associated with tensor networks due to their large intermediate memory capacity.

Perlin also participated in a second collaborative project, studying ways to cut large circuits into smaller circuit fragments that could then be run on classical computers or small quantum devices. He worked with his mentor and three other research students to explore strategies to recombine fragment simulation results in a way that mimics the circuit’s pre-dissected state.

Perlin chose to do research at the ALCF because of the career-refining experience it offered him. “As a graduate student with an open-ended career path, I am on the lookout for research areas and work environments that I may want to pursue in the future,” said Perlin. “ALCF offered an opportunity to study a subject I am interested in (quantum computing) at a type of institution where I haven’t worked before.