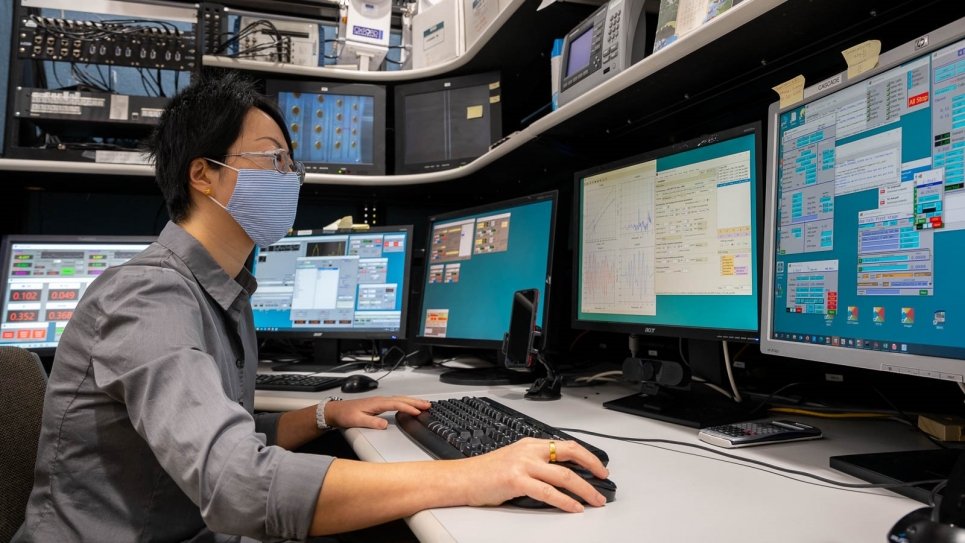 Employees across the lab, including ALCF’s Carissa Holohan, are helping to build a safe, welcoming, and inclusive environment that supports and promotes gender equality and diversity.

As the nation celebrates Women’s History Month, International Women’s Day and International Transgender Day of Visibility in March, the U.S. Department of Energy’s (DOE) Argonne National Laboratory marks more than 30 years of pioneering gender equality initiatives among the national laboratory system, and looks ahead to the continued changes that will come from new commitments and collaborations.

From the laboratory director to the research and support staff, employees from across Argonne have expressed their support for gender equality and diversity. But the laboratory’s work is more than campus-wide; its culture change and outreach extend to the local community, the nation and the world.

“We see our involvement and our commitment to take action as really one of the critical undertakings we have at Argonne, to really foster a safe, welcoming, and inclusive environment,” said Megan Clifford, the associate laboratory director for Science & Technology Partnerships and Outreach.

Much of Argonne’s efforts to address gender equality and diversity started more than 30 years ago, when it organized the Women in Science & Technology (WIST) Program in 1990. WIST aims to recruit, retain, and promote women to diversify and strengthen the laboratory’s scientific workforce.

Today, new WIST Initiatives include the Mentoring Circles pilot program, in partnership with Dale Carnegie, to support staff with an emphasis on women through small group networking and skill development. WIST is also working with Argonne’s Human Resources Services division to understand the status of women and how they make up career designations in different job classifications, said J’Tia Hart, the WIST program initiator and program lead in the lab’s Strategic Security Sciences division.

Women have played an important role at Argonne for decades and it has helped them excel in the scientific and technical fields, from Nobel Prize-winning physicist Maria Goeppert Mayer in the 1940s, to the present with Argonne’s first woman Associate Laboratory Director Kawtar Hafidi, and its first African American woman Distinguished Fellow Valerie Taylor, said Hart.

“Argonne exemplifies its commitment through WIST, which was created and directly supported by the Office of the Director. While WIST is widely known for its outreach events, such as Introduce a Girl to Engineering Day and Science Careers in Search of Women, the program also advocates for women staff at the laboratory, builds an inclusive community for women and develops women leaders. Former WIST program initiators have gone on to lead groups, divisions, and directorates,” Hart said.

“Support and elevation of women are crucial to progress in science and technology, which requires a diversity of thought to solve the world’s biggest problems,” Hart said. ​“I am encouraged that Argonne agrees and is putting the resources and strategy into action to increase women participation at the laboratory and in science, technology, engineering, and math.”

Argonne has 3,494 employees, with women holding 29.8% of the jobs across the laboratory, according to Argonne’s statistics from July 2020. Women comprise 17.8% of the research staff.

Worldwide, less than 30% of researchers are women, according to 2019 data from the UNESCO Institute for Statistics, the statistical office of UNESCO and the U.N. depository for global statistics in education, science and technology, culture, and communication.

Besides WIST, Argonne is active in groups outside the laboratory, including Equal By 30, a global initiative that aims to eliminate discrimination in recruitment practices and work towards equal pay, equal leadership and equal opportunities for women by 2030.

“Argonne is committed to creating systemic equity to ensure our employees are treated fairly,” said Lydia Finney, a former WIST program initiator and now diversity, equity, and inclusion partner at the Argonne Leadership Institute. ​“We have built upon that commitment with regards to gender equity from the time that our Women in Science and Technology program was created over 30 years ago through to the present day as we make our Equal by 30 commitments. At Argonne, we recognize that we must create and sustain a safe, welcoming, and inclusive environment for each member of the laboratory community.”

In addition to women-specific issues, Argonne also provides a  wider focus with Spectrum, an employee resource group for lesbian, gay, bisexual, transgender, queer (and in some cases  ​“questioning”), intersex, asexual (and sometimes ​“ally”), and “+” for other orientations and identities (LGBTQIA+).

To commemorate events throughout the year, including International Transgender Day of Visibility on March 31, Spectrum posts a blog where members share thoughts, insights, and resources from the Argonne community. The group also facilitates panel discussions with participants from Argonne, other national laboratories and the public. These discussions focus on raising awareness of Argonne’s gender- and sexual-minority community as well as the unique experiences of being gender and sexual minorities (GSM/LGBTQIA+) in the STEM fields, said Pete Friedman, co-chair of Spectrum, the first such group in the national laboratory system. Friedman is also an enterprise architect in Argonne’s Business and Information Services.

Visibility and allyship have been important and send a message that equality and inclusion are championed at the highest levels of the organization, not just those impacted, said Friedman.

More than one in four transgender people nationwide ​“have lost a job due to bias, and more than three-fourths experienced some form of workplace discrimination. Refusal to hire, privacy violations, harassment and even physical and sexual violence on the job are common occurrences and are experienced at even higher rates by transgender people of color,” according to the National Center for Transgender Equality.

The LGBT Climate in Physics report, published in March 2016 by the ad hoc American Physical Society Committee on LGBT Issues, surveyed 324 LGBT physicists, most of whom work in academia, and found that more than one-third of the respondents considered leaving their workplace or school in the previous year. The survey also said 40% of respondents felt pressured to hide their sexuality, while about 20% reported experiencing exclusionary behavior, such as sexual harassment, homophobic comments or expectations of incompetence, according to American Physical Society’s APS News in 2016.

In addition, a study from the Williams Institute at the UCLA School of Law lays out startling numbers: transgender adults are 12 times more likely to have suicidal thoughts in a year when compared to their cisgender peers. Even more disturbing, the number of suicide attempts is 18 times higher.

“International Transgender Day of Visibility is an opportunity to engage our communities and alert our colleagues to these horrifying statistics and remind everyone that attacks on our rights are growing and accelerating,” said Carissa Holohan, principal HPC network administration specialist in the Argonne Leadership Computing Facility and a transgender member and co-chair of Spectrum.

“Making sure that anyone who is gender-diverse at Argonne is comfortable, supported, and welcomed is of the utmost importance. By celebrating International Transgender Day of Visibility, the workforce is sending a clear message that Argonne cares,” said Holohan.

“Discrimination based on gender identity is causing lasting harm and loss of life in this country. Argonne has a duty to uphold scientific integrity, and the science on this is clear: supporting transgender and gender-diverse individuals saves lives,” said Holohan.

In addition, Spectrum has been working closely with Argonne’s Leadership Institute to develop a program called SafeZone, which was implemented at the University of Chicago and the DOE’s Fermi National Accelerator Laboratory. The program features workshops and discussions designed to equip people with the knowledge and tools to have impactful, meaningful, and positive conversations about gender, gender identity, sexual orientation, and other differences in the workplace. While the material focuses on the LGBTQ+/GSM community, the tools are widely applicable beyond those topics, and the group looks forward to making them available at Argonne.

“We all have a part to play in living the laboratory’s core values and creating an inclusive, welcoming and psychologically safe environment for everyone and when that participation includes those with influence, authority, and the power to drive change, great things happen,” said Friedman.

While Argonne works on the home front, it also is engaging nationally. In 2019, Argonne joined the National Academies of Sciences, Engineering and Medicine and more than 60 colleges, universities, and research institutions in an Action Collaborative on Preventing Sexual Harassment in Higher Education. To date, Argonne is the only national laboratory to become a member in the Action Collaborative. The participating institutions aim to develop action plans that move beyond the basic legal compliance to evidence-based policies and practices at the individual and systems levels to address and prevent all forms of gender and sexual harassment, and to promote civility and respect.

“Argonne recognizes our research environment is similar in many ways to academic institutions, and we share the Action Collaborative’s commitment to creating a culture that is safe and welcoming for women and under-represented minorities. This is about culture change for the long haul,” said Kirsten Laurin-Kovitz, an Argonne representative to the Action Collaborative and Argonne’s Strategic Security Sciences division director. She is also a former WIST program initiator.

As part of its commitment to the collaborative, Argonne has created a community engagement plan within the larger framework of the lab’s diversity, equity, and inclusion plan to bolster ongoing efforts to engage the Argonne community in preventing gender and sexual harassment. Actions in the plan include appointing executive champions and a steering committee; coordinating and aligning leadership accountability and involvement; creating an integrated and comprehensive Code of Conduct; mandating sexual and gender harassment training for all employees; making training personal through interactive learning activities, stories and case studies; and engaging the Argonne community in ongoing dialogue and creating an investigation metrics report.

Participation in the Action Collaborative and execution of the community engagement plan will advance Argonne’s efforts to build a safe, welcoming, diverse and inclusive culture; bolster research integrity; and help to attract and retain diverse staff whose unique perspectives help the lab fulfill its scientific mission.

In addition to its work with the Action Collaborative, Argonne has focused on its culture by establishing core values and implementing programs to recognize positive behaviors. The lab also updated its Research Integrity Code of Conduct and established an ombuds office as a resource for employees to raise concerns confidentially.

“Argonne has been excellent at picking up the mantel and going forward in making it real for everyone. The message that this is sending, and I agree, is that this is a good place for women to work,” said Laurin-Kovitz. ​“We want to promote an environment that gender and sexual harassment is eliminated. This is something that we are creating, an environment where people can expect to be treated respectfully during their careers at Argonne.”