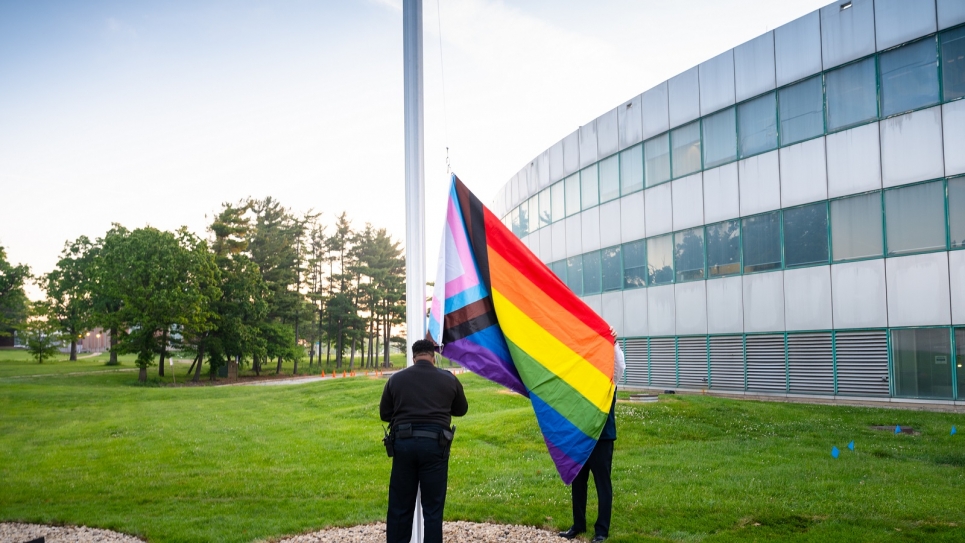 ALCF's Carissa Holohan takes part in a Q&A on Pride Month, the pride movement, and Argonne’s partnership with the LGBTQIA+ community.

During the month of June, the U.S. Department of Energy’s (DOE’s) Argonne National Laboratory will mark Pride Month by flying the Progress Pride flag on its campus, celebrating the laboratory community and building inclusivity.

In the half century since the first pride parades, pride months have become ever more inclusive, extending their celebration to all who feel their gender identity or sexual orientation falls outside the mainstream. This includes all those who are lesbian, gay, bisexual, transgender, queer, intersex, and asexual (LGBTQIA), or any of the myriad combinations of these traits that create a vast array of personal identities commonly grouped together under the term sexual and gender minorities (SGM).

Many will celebrate Pride Month throughout the campus, especially members of Spectrum, Argonne’s employee resource group (ERG) dedicated to building awareness and providing resources for those in the laboratory community who identify as SGM or allies to their LGBTQIA+/SGM peers. Spectrum members plan special blog posts, a two-part panel series ​“On the Importance of Pride,” along with other initiatives.

Carissa Holohan, a principal high performance computing network administrator in the Argonne Leadership Computing Facility, and Pete Friedman, an enterprise architect in Argonne’s Business and Information Services, are co-chairs of Spectrum. Here are their insights about Pride Month, the pride movement and Argonne’s partnership with their community.

Q: In general, what is the history and significance of the pride movement?

FRIEDMAN: Pride is about celebrating authentic existence. The first pride event was in recognition of the anniversary of the Stonewall Uprising — a response to violent police raids of the Stonewall Inn in New York in 1969. The importance of pride is especially relevant today; we are still seeing violence in general against the SGM community, especially Black and LatinX transgender people.

More than 40 trans people were murdered in 2020, according to Human Rights Campaign (HRC), and violence against trans people has been worse in 2021. The introduction by multiple states of antitransgender legislation adds to the fear and uncertainty of our community.

HOLOHAN: An HRC article summarizes 2020 with a total of 44 homicides. Another HRC articlenotes murders in the month of May. The total is now up to 27 in the first 145 days of 2021. Linear extrapolation shows this trend is 155% of last year’s violence.

Q: What is the significance of Pride Month?

FRIEDMAN: I really hope that this year, Pride Month can serve as a lens to focus us on creating an inclusive, multiracial democracy. We must stand in solidarity against white supremacy and violence against underrepresented groups and celebrate our differences and the accomplishments we can achieve when we treat our differences as collective strength.

HOLOHAN: Pride 2021 will be a month of shouting ​“Ha, I’m still alive!” to those who are actively fighting against my unalienable rights. The last few years have been a painful march through enemy territory for underrepresented minorities in this country.

Q: What challenges do LGBTQIA+ and SGM face at Argonne and in science in general?

FRIEDMAN: The SGM community isn’t a monolith and so the experiences of SGM people vary widely. As a white, cisgender male, I’ve generally faced few challenges beyond the occasional homophobic joke or other microaggression, but my experience is mine alone. I’ve certainly heard of people in early-career STEM whose relationship with their advisor changed for the worse after coming out. Transgender people often are forced to choose between their publishing legacy and outing themselves as transgender. I’d really encourage folks to read the LGBTQ Climate in Physics report for a good overview of the challenges faced by the SGM community.

HOLOHAN: Counting bills that have become law in the last few years, 16 states now have extensive restrictions upon my rights and freedoms as a transgender woman.

I frequently travel on official Argonne business. Will I be faced with cruelty and embarrassment everywhere I turn? Will I be able to safely fulfill basic travel needs, use public airports, stay in hotels, or visit restaurants without being denied access due to my gender identity?

These concerns are just a small sampling of the psychological strain that burdens members of the SGM community and will have a lasting negative impact on our ability to achieve world-class science.

Q: What is Spectrum and why is it at Argonne?

FRIEDMAN: Our Spectrum page on Argonne’s website says it best: ​“Spectrum ERG is an employee resource group (ERG) dedicated to building awareness and providing resources for those in the laboratory community who identify as lesbian, gay, bisexual, transgender, queer, questioning, intersex, asexual, agender, or allies to their LGBTQIA+ peers.”

Spectrum also recognizes and encourages the incredible diversity of gender identities and sexual orientations, including those that may not be accurately portrayed in some of these terms. Spectrum is dedicated to fostering an environment of understanding, acceptance, and equality for all within the laboratory community.

Q: How are Spectrum and Argonne partnering for change?

FRIEDMAN: Spectrum, and the other ERGs along with diversity, equity, and inclusion councils maintain an active advisory relationship with Argonne leadership. Our role is not only to create a welcoming space for members of our community, but also to embed equity and inclusion into the fabric of our culture.

Argonne understands that cultivating a diverse, world-class community of talent is key to solving the problems our world and our nation face now and in the future.

As Argonne becomes more intentional in how it celebrates the diversity of its employees, it is important to note that recognizing one group does not come at the expense of another. Making our LGBTQIA colleagues feel seen, safe, and celebrated does not decrease the inclusion, safety, and support we offer to all members of our community.

Q: What does the Progress Pride flag flying at Argonne mean for everyone, and especially, for Spectrum?

FRIEDMAN: This is a big deal for us. You must remember that it wasn’t long ago that you could be terminated or have a clearance revoked for being found out as gay — and I don’t just mean back in the 1950s and 60s. In 1992, U.S. Army Col. Margarethe Cammermeyer had revealed she was a lesbian during a review of her top-secret security clearance and received an honorable discharge. It was not until 1995 that this policy was changed, and sexual orientation was added to the federal nondiscrimination statement.

Argonne has folks who remember those times, and the fear that came with it. Today, young people are witnessing state and federal lawmakers propose cruel legislation against their transgender peers and wonder if that’s what the culture in government agencies is like.

In raising the Progress Pride Flag, Argonne is standing in support and recognition of its LGBTQIA+ and SGM community and welcoming young SGM scientists to be a part of the amazing work that we do.

Argonne National Laboratory seeks solutions to pressing national problems in science and technology. The nation’s first national laboratory, Argonne conducts leading-edge basic and applied scientific research in virtually every scientific discipline. Argonne researchers work closely with researchers from hundreds of companies, universities, and federal, state and municipal agencies to help them solve their specific problems, advance America’s scientific leadership and prepare the nation for a better future. With employees from more than 60nations, Argonne is managed by UChicago Argonne, LLC for the U.S. Department of Energy’s Office of Science.