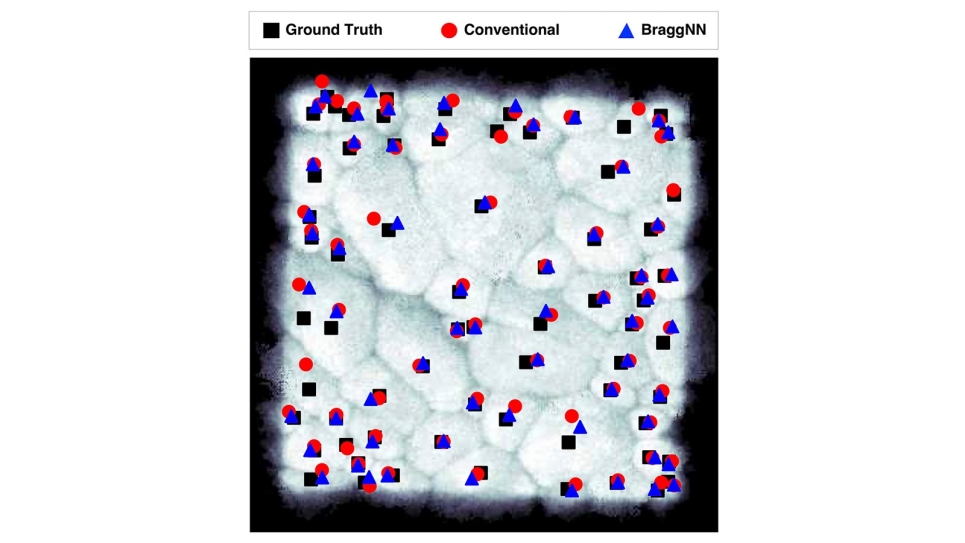 Using ALCF supercomputing and AI resources, an Argonne team has developed a new method to speed up the analysis of X-ray diffraction data.

Artificial intelligence (AI) is transforming every scientific field, from biology to materials science. When it comes to some types of X-ray experiments, new AI approaches have enabled researchers to obtain a more accurate analysis of their samples and to do so in a much shorter amount of time.

A group of researchers at the U.S. Department of Energy’s (DOE) Argonne National Laboratory are harnessing AI to perform the challenging task of analyzing data from high-energy X-ray experiments. With a new neural network-based method called BraggNN, the Argonne team can more precisely identify Bragg peaks — data points that indicate positions and orientations of tiny individual crystals — in a fraction of the time they used to.

Neural networks (the NN in BraggNN) are algorithms that look for patterns in data and, over time, learn to predict outcomes, speeding up the analysis of that data.

“BraggNN gives us far greater efficiency and speed than conventional techniques,” said Argonne’s Antonino Miceli, an author on the paper and a group leader at the Advanced Photon Source (APS), a DOE Office of Science user facility at Argonne.

In recent years, a technique called high-energy diffraction microscopy (HEDM) has become one of the most popular ways scientists use to accurately characterize complicated materials with high resolution. Although HEDM has proven to be a great improvement over conventional techniques, it can also be expensive and time-consuming. It involves the collection of enormous datasets, analysis of millions of Bragg diffraction peaks and reconstruction of the sample using those peaks.

The impending upgrade of the APS is expected to vastly improve the speed of HEDM data acquisition to a minute or less. But the computing time to complete analysis of multiple Bragg peaks can extend to hours or weeks, even with the largest supercomputers. Not only do such delays slow research, they also prevent the use of HEDM information to steer experiments. For instance, scientists studying how cracks form in materials could use the analyzed data to track where those cracks are emerging, in close to real time.

To address these challenges, the researchers working at the APS turned to AI to accelerate and streamline Bragg peak analysis. The conventional method involves using a 2D or 3D model and fitting the peak data to it, but the research team’s new model can directly determine the peak positions from the data.

“Conventional methods work like trying on a suit at a tailor’s,” said Argonne computational scientist Hemant Sharma, an author on the study. ​“First you have to try on an estimated shape, and then do form-fitting after it. With our technique, using a neural network, it’s like generating the perfect suit instantly from just a photograph of a person.”

After the model was trained on data containing diffraction peaks, the researchers were able to dramatically speed up analysis and improve accuracy. ​“The true accomplishment is that we made peak determinations much faster and also delivered sub-pixel accuracy — the gold standard for making useful conclusions,” said Argonne computer scientist Zhengchun Liu, the first author on the paper.

The advanced computational methods used by BraggNN are especially conducive for use on a graphics processing unit (GPU) chip, which helps further accelerate its performance.

The team used the ThetaGPU system at the Argonne Leadership Computing Facility (ALCF), a DOE Office of Science user facility, and the Cerebras AI platform at the ALCF AI Testbed to rapidly train the model.

A paper based on the study was published in the Journal of the International Union of Crystallography. Other authors of the study include Argonne’s Jun-Sang Park, Peter Kenesei, Jonathan Almer, Rajkumar Kettimuthu and Ian Foster.