The futuristic South Pole Telescope looks far back in time 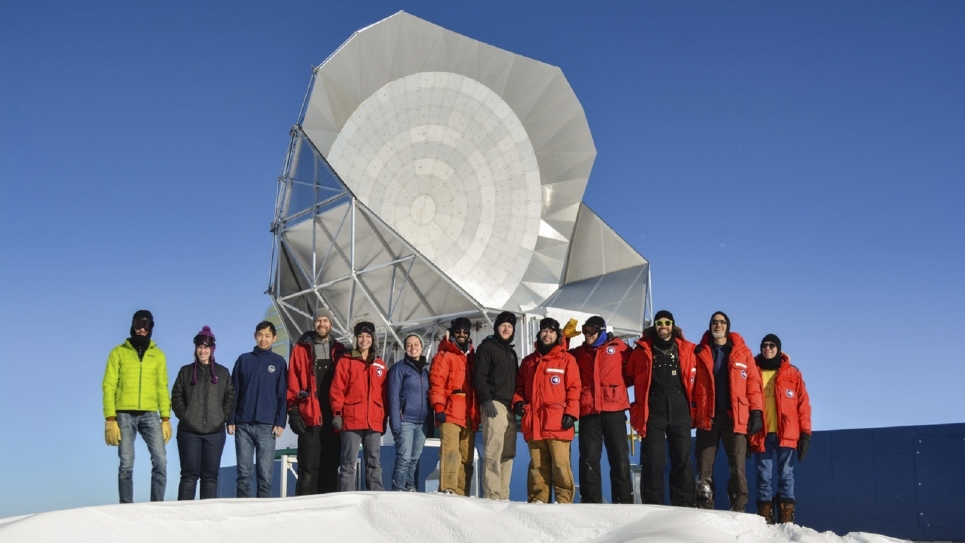 Surveying the cosmos from its isolated position in Antarctica, a collaborative project aims to reveal insights about the universe’s beginnings. As part of the effort, ALCF computing resources help scientists decode observations from the telescope.

In summer at the South Pole, which lasts from November through February, the average temperature is a biting minus 18 degrees F. The sun does not set during this time, making sleep a challenge. The environment is harsh and dry. And the Internet connection at the Amundsen–Scott South Pole Station, when you can access it, is painfully slow.

On the other hand, distractions from work are few, and the landscape is stunning. The meals from the onsite kitchen are great. The best part? There’s an unparalleled view of the early universe. 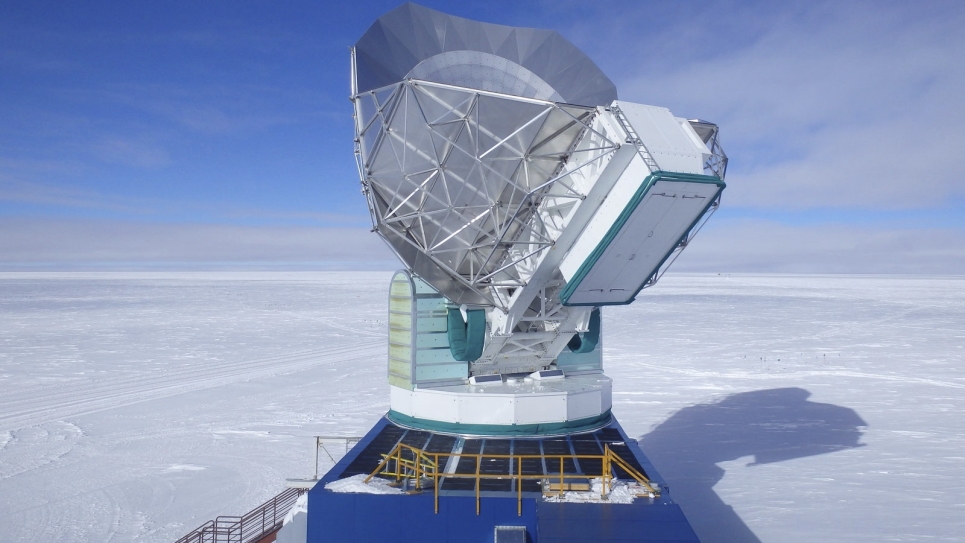 The South Pole Telescope is located at the Amundsen–Scott South Pole Station, Antarctica. The station features dorms, offices, a cafeteria, gym and other amenities for visitors. (Image by Lindsey Bleem/Argonne National Laboratory.)

Seeing the oldest light in the universe

That view, which comes from the research station’s South Pole Telescope (SPT), isn’t what many of us would imagine when we look up at the sky. Rather than stars and planets, the SPT’s images look more like a Jackson Pollock painting. They capture data related to the origin of the universe and its evolution over billions of years.

Since the SPT began operating in 2007, it has helped researchers discover over 1,000 giant galaxy clusters (including some truly exceptional ones) and has changed our understanding of the period when the first stars formed, among other revelations. Over 20 universities and U.S. Department of Energy (DOE) research facilities, including Argonne National Laboratory, are collaborating on the effort.

The 33-foot telescope uses detectors developed and built at Argonne to study the cosmic microwave background (CMB). The CMB consists of light produced when the universe was about 380,000 years old. Back then, the baby universe was an intensely hot plasma, and the glow it produced has been traveling through space for about 14 billion years.

“Looking at the cosmic microwave background, painting our early universe and connecting it to the observations we see today, forms one of the key foundational pillars of our cosmological model,” said Lindsey Bleem, a physicist at Argonne who collects and analyzes data from the SPT.

Antarctica is one of the best places in the world to detect this faint signal because it is essentially a frozen desert and very dry. Water in the air can create ​“noise” in a view of the skies with a telescope, Bleem explained, making the picture less clear. The SPT’s environment is as free of interference as possible on Earth.

For the most part, scientists can collect and work with the SPT’s data from Argonne in Illinois or from anywhere else that is set up to access the data remotely. But occasionally, maintenance and upgrades such as a third-generation camera installed in 2017 require travel to this facility in the middle of a frozen desert.

Whether it’s dealing with the teeth-chattering cold, waiting for supplies to come in or making sure equipment is maintained and weatherized, the remote location can be daunting. The lack of humidity alone is ​“something that’s a bit challenging and can also interfere with how things go day to day,” said Clarence Chang, an Argonne physicist who develops superconducting detectors for the SPT.

One upside: During the telescope’s summer season, staff cooks provide meals for visiting researchers, and ​“the food is absolutely fantastic,” Bleem said.

The 2017 upgrade to the SPT’s camera took it from 1,600 to 16,000 detectors. Aggregated together, the detectors resemble a honeycomb measuring about 17 inches across. The detectors are kept far colder than even the coldest Antarctic night, at just above absolute zero, or minus 459 F. The temperature, combined with the sensitivity of their superconducting materials, helps them register the very faint light of the CMB. 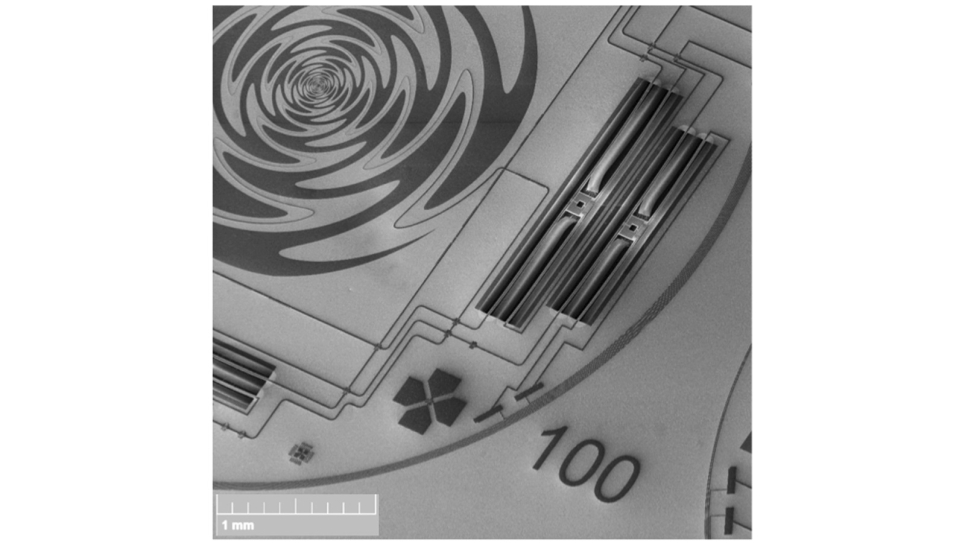 The South Pole Telescope’s detectors are kept extremely cold at just above absolute zero, or minus 459 F, which helps them register the very faint light of the cosmic microwave background. (Image by Clarence Chang/Argonne National Laboratory.)

Researchers took advantage of Argonne’s Center for Nanoscale Materials, a DOE Office of Science user facility, to fabricate the detectors. The facility’s equipment makes it possible to control superconducting materials and process them consistently.

One of the research goals of CMB observations is to explore a theory known as cosmic inflation, the idea that the early universe underwent a massive, unimaginably rapid expansion. That theory is associated with predictions of particular patterns in the CMB.

“These predictions are extremely challenging to measure. The signals are very faint, which requires building incredibly sensitive instruments,” Chang said.

The SPT began a six-year survey with the new camera in 2018. The enhanced detector array, combined with years of observation, is a little bit like setting a long exposure on the latest and greatest smartphone camera to capture a detailed picture at night.

“It’s ticking along, collecting the data for us,” said Amy Bender, an Argonne physicist who helped install the third-generation camera. ​“We are observing the same piece of sky every single day, all day. The more we observe it, the better we can detect fainter signals.”

When the SPT’s run ends in 2024, scientists will be busy not only analyzing the resulting data but working on further upgrades to the SPT. 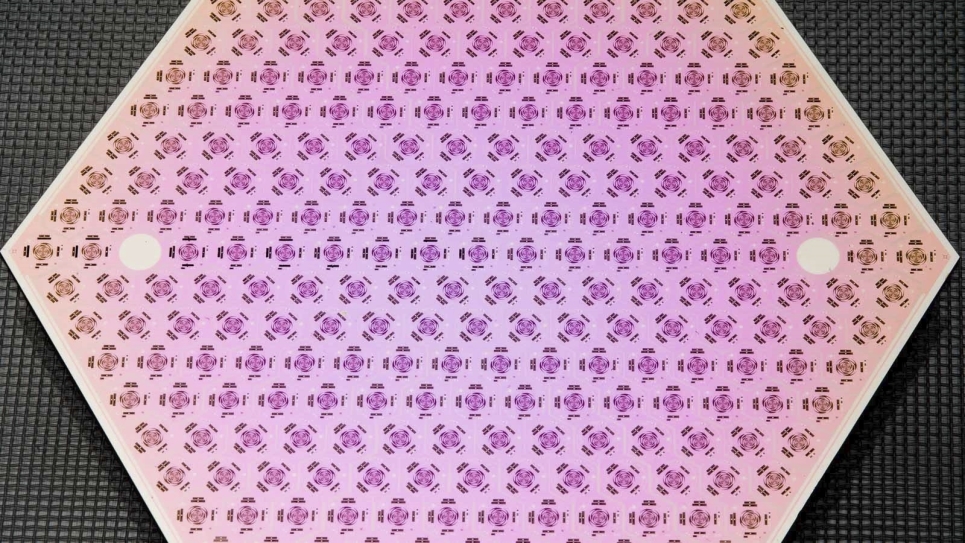 An array of supersensitive detectors helps the South Pole Telescope detect the oldest light in the universe. (Image by Clarence Chang/Argonne National Laboratory.)

Argonne’s ability to reliably produce super-sensitive telescope detectors will also be critical to a new, ambitious experiment: CMB-S4. In that experiment, a collaboration of Argonne and dozens of institutions worldwide, 21 telescopes at the South Pole and in the Chilean Atacama desert will survey the sky for seven years starting at the end of the decade. The number of detectors deployed will jump to 500,000, and some of them will be made at Argonne.

Simulations that run on high performance computers at the Argonne Leadership Computing Facility, also a DOE Office of Science user facility, are key in decoding observations from the SPT. Scientists use this computing power to correlate theories about how matter and forces interact in the universe. A galaxy cluster in the telescope’s line of sight, for example, will distort background light from other galaxies and the CMB. That effect needs to be measured and correlated back to theoretical predictions.

To explain how simulations aid observations, Bleem gave an example: Let’s say you had a picture of the Eiffel Tower with no data on how tall the structure is. You could use the known measurement of a nearby object, such as a person standing on the ground, to reason out its dimensions. Similarly, computers help bridge the gap between what we know and what we aim to discover by both giving us understanding into these complicated processes and allowing us to assess how well our analysis tools can reconstruct models of these phenomena.

“The first cosmology codes only simulated gravity,” Emberson said. ​“But as we’re getting better and bigger telescopes that can collect more information in the universe, it’s important that we have the capabilities to simulate more than just gravity.”

Emberson works on the Hardware/Hybrid Accelerated Cosmology Code (HACC), the framework used to run cosmological simulations for the SPT and other telescopes. His work, part of the Argonne-led ExaSky project, is preparing HACC for exascale computers like Aurora, which will be well suited to handle extreme-scale cosmological simulations.

Both the computing and the advanced detectors being developed at Argonne are serving the SPT’s exploration of the cosmos. But they are also relevant to a range of other technologies here on Earth, such as screening for healthcare and security.

“No company is making equipment like this today,” Bender said. ​“So, we’re leading the front to push the technology for it. Who knows what doors that might open for other areas?”

The South Pole Telescope is funded and supported by the National Science Foundation, the DOE Office of High Energy Physics, the Kavli Institute for Cosmological Physics at the University of Chicago, and the U.S. Antarctic Program.