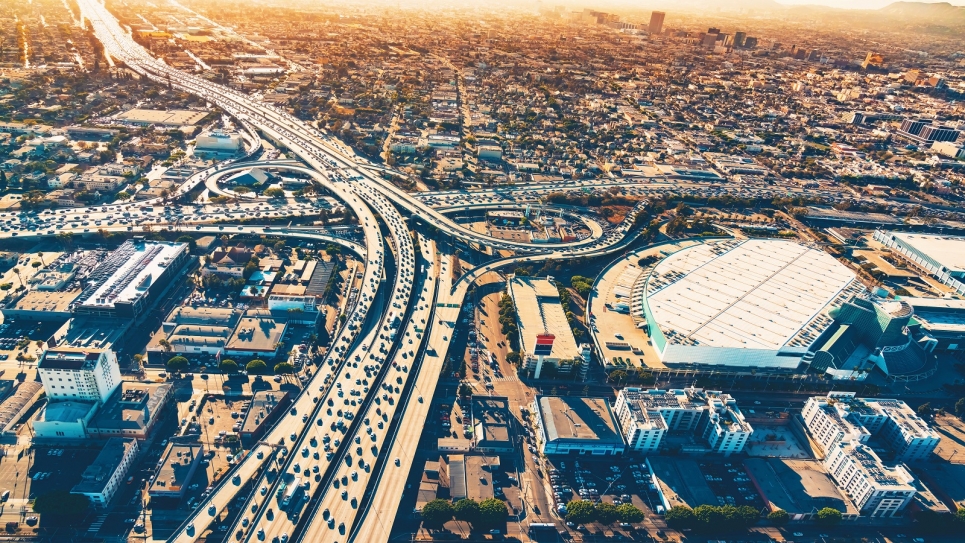 It’s no secret that Los Angeles is notorious for its traffic jams, typically ranking first in studies of the nation’s traffic hot spots. Estimates suggest that Angelinos spend an extra 120 hours a year stuck in them. While a nightmare for drivers, the L.A. transportation system does have its advantages if you’re devising a new system to quickly predict and potentially redirect that traffic.

Researchers from across the U.S. Department of Energy’s (DOE) Argonne National Laboratory set out to do just that under the umbrella of a larger project on the design and planning of mobility systems led by collaborators at DOE’s Lawrence Berkeley National Laboratory (LBNL).

Using an artificial intelligence (AI) technique called machine learning, the team leveraged Argonne’s supercomputers to digest traffic patterns from nearly a year’s worth of data taken from 11,160 sensors along the large California highway system. That information was then used to train a model to forecast traffic at lightning fast speeds — certainly faster than L.A. traffic. Within milliseconds, the model can look at the past hour of data and predict the next hour of traffic with great accuracy.

“The AI and supercomputing capabilities that have been used in this work allow us to tackle really large problems,” said Prasanna Balaprakash, a computer scientist in MCS with a joint appointment in the ALCF. ​“The scale of this project is large, and this amount of data requires an equally large computing resource to tackle it.”

Using ALCF’s world-class computing resources, the scientists drastically reduced the number of computer hours needed to train the model. For example, where it might take a top-of-the-line desktop computer a week to train the traffic forecasting model, the same process can be done in three hours on a supercomputer.

Harnessing the power of graph-based deep learning — a complex form of machine learning that can make decisions and improve a model’s predictions almost automatically — their model uses historical data to predict traffic patterns, while forecasting speed and flow at the same time. This is important because traffic flows in one area at any given time depend upon the speed and flow of traffic nearby.

“Traffic forecasting approaches are critical to developing adaptive strategies for transportation,” said Eric Rask, a former principal research engineer with Argonne’s Center for Transportation Research and one of the scientists involved in the study. ​“Traffic patterns have complex spatial and temporal dependencies that make accurate forecasting on large highway networks a challenging task.”

Not only did the team capture those dynamics, they accomplished it on a network with dramatically more sensors and prediction locations than previous traffic forecasting models, Rask noted. And by breaking the large network into a number of smaller ones, they were able to train each portion of the network independently, greatly increasing the speed and effectiveness of the model.

Previous models could handle data from only 200-300 sensor locations; but with this new graph-partitioning method, the team was able to process data from over 11,000 locations while reducing the model training time by an order of magnitude. This method was not only fast, it could accurately predict the speed of traffic an hour into the future, typically within 6 mph of the observed speed at any location across the network.

“The scale and accuracy of the forecasting techniques have the potential to enable better decision making,” said Tanwi Mallick, a postdoctoral appointee in MCS and first author on the project.

Mallick and her colleagues believe the model can be readily integrated into traffic management centers, providing traffic controllers a better means by which to react to and address traffic jams and reroute traffic accordingly.