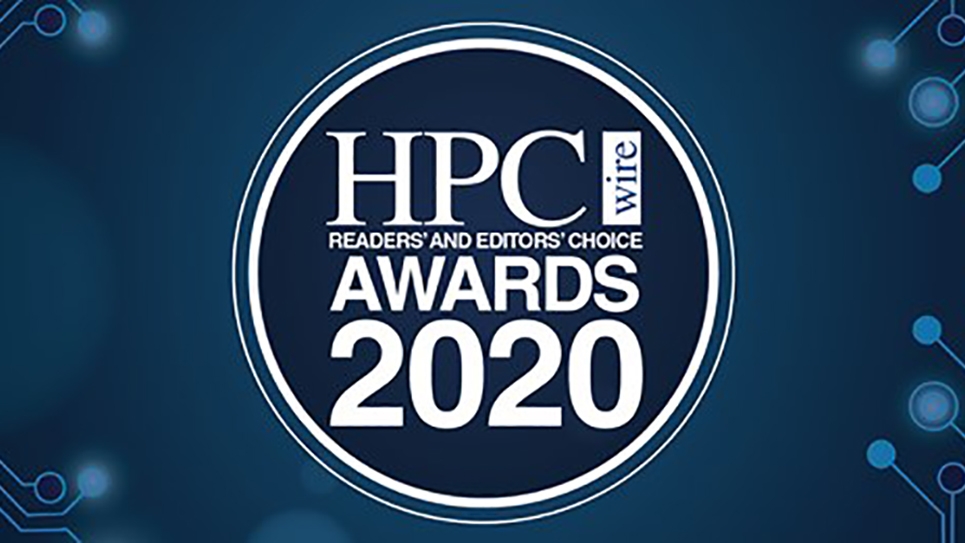 Two teams of scientists from the U.S. Department of Energy’s (DOE) Argonne National Laboratory have won HPCwire Awards, recognizing their innovative use of high performance computing (HPC) to optimize engine design. The awards were presented by HPCwire magazine.

The awards were formally announced virtually at SC20, the International Conference for High Performance Computing, Networking, Storage, and Analysis on Nov. 16. 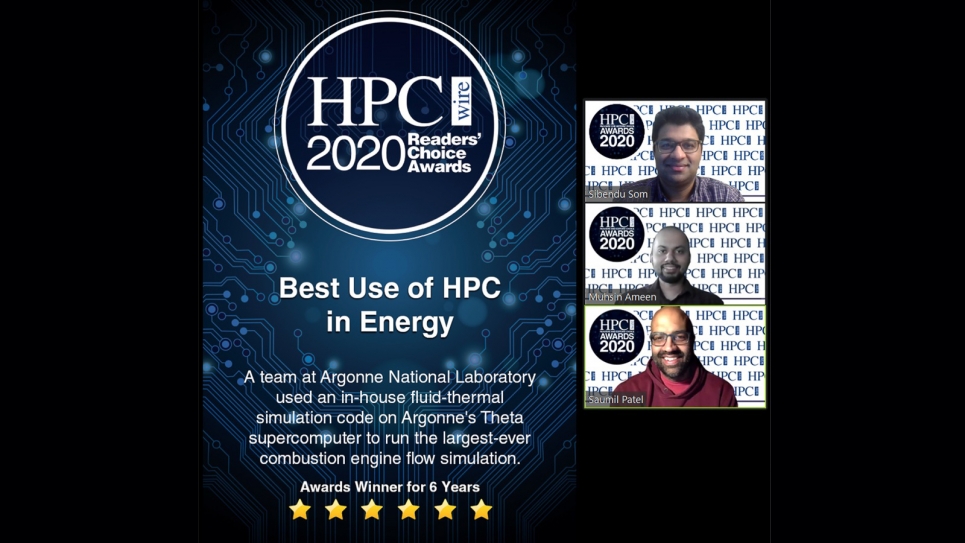 The Argonne team of Sibendu Som, Muhsin Ameen, and Saumil Patel won the Readers’ Choice Award for Best Use of HPC in Energy. (Image: HPCwire)

A multidivisional research team from Argonne was recognized for work on a groundbreaking engine simulation that could help automotive manufacturers design a more efficient engine. Using Nek5000, an Argonne-developed fluid-thermal simulation code, they ran a flow simulation that could simultaneously and accurately resolve all the turbulent flow scales inside an internal combustion engine. These simulations would not have been possible without the use of the Theta supercomputer at the Argonne Leadership Computing Facility (ALCF), a DOE Office of Science User Facility.

“We are honored to receive this distinction. This simulation campaign has been the culmination of years of work and it is exciting to see our efforts being recognized,” said Saumil Patel, an assistant computational scientist in Argonne’s Computational Science division. Other Argonne team members include Muhsin Ameen, a research scientist in the Center for Transportation Research, and Sibendu Som, manager of Argonne’s Computational Multi-Physics group in the Energy Systems division. 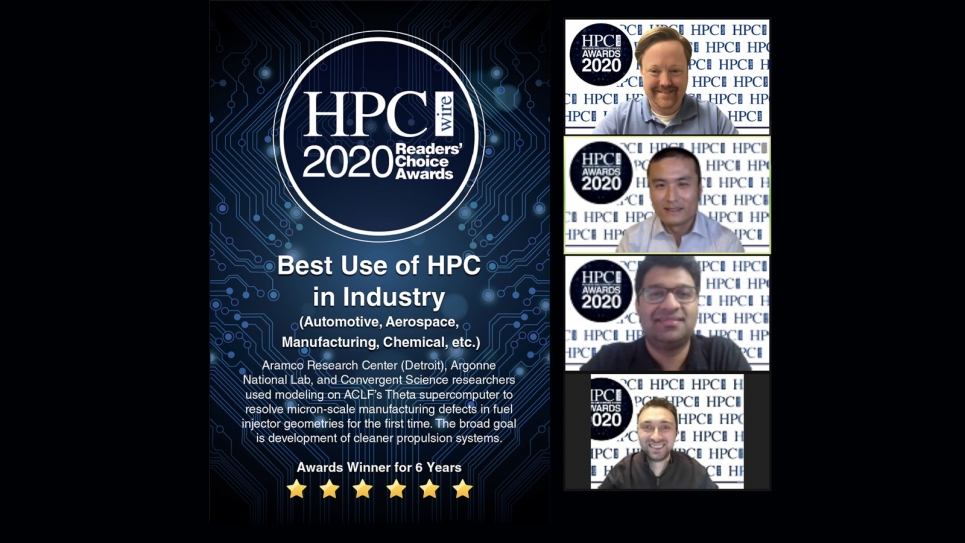 A group of engineers, including Argonne’s Sibendu Som and Roberto Torelli, won a Readers’ Choice Award for Best Use of HPC in Industry. (Image: HPCwire)

The second Argonne project to receive an HPCwire Award was part of a collaboration with the Aramco Research Center in Detroit and researchers from Convergent Science. For more than five years, the team has been working together to develop cleaner propulsion systems for engines. One of the ways they are doing this is to design the next generation of ultraefficient, low-carbon footprint propulsion systems.

“The last few years we have been working toward trying to understand what really happens inside automotive injectors for heavy-duty engines,” said Roberto Torelli, a research scientist at Argonne, who accepted the HPCwire award on behalf of the team. ​“Now we can rely on HPC to resolve very small-scale features inside an injector that happen at very small time scales as well, so we can get a better idea of how these features will eventually influence the engine performance in the real world.”

The team addressed this issue by first using the Advanced Photon Source (APS), a DOE Office of Science User Facility at Argonne, to look for tiny micron-scale manufacturing defects on the tip of a fuel injector. Then, using the information obtained from the APS, they turned to Argonne’s HPC resources to perform accurate simulations. This combination of technologies will help them understand how an injector will work with diesel and gasoline fuels in the real world — all in a reasonable amount of computational time.

“Internal combustion engines still have a vital role to play in future transportation, so it’s imperative we continue to improve them,” said Kelly Senecal, co-owner and vice president of Convergent Science. ​“It’s an honor to work with our colleagues at Aramco and Argonne to perform research that propels us toward our goal of clean transportation.”

This is the team’s second HPCwire award. In 2019, the team won an award for their work to develop an ultraclean and high-efficiency gasoline compression ignition engine combustion system using the ALCF’s Mira supercomputer (now retired). This year, the team won for expanding upon that work and applying it to the fuel injector as well.

“It is truly an honor to repeat as the winners of such a prestigious award and be part of a great collaborative team,” said Yuanjiang Pei, a technical specialist at Aramco Americas. ​“We hope the knowledge generated will be beneficial for the industry to develop more efficient and cleaner engines.”

Ultimately, using HPC computing and detailed simulations for the design of internal combustion engines can save both time and money.

“By using simulations, we have reduced the cost of the process,” said Som, who was involved in both award-winning research projects. ​“If you have to cut metal every time, it’s very expensive. Using simulations makes it much cheaper and faster to do it virtually.”

This research was funded, in part, by DOE’s Office of Energy Efficiency and Renewable Energy’s Vehicle Technologies Office.