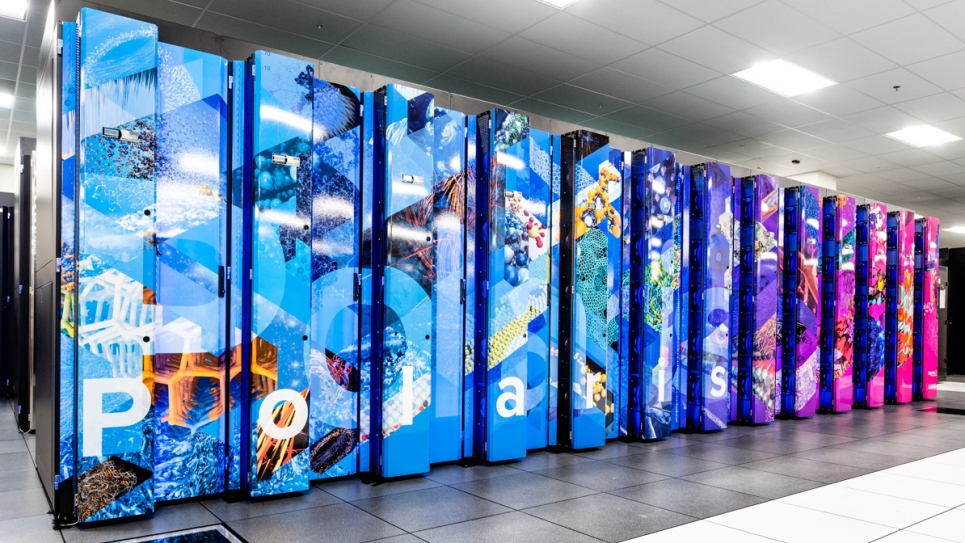 Polaris provides researchers with a powerful new tool to prepare for science in the exascale era.

Polaris, the newest supercomputer at the U.S. Department of Energy’s (DOE) Argonne National Laboratory, is now open to the research community.

The system, which is housed at the Argonne Leadership Computing Facility (ALCF), a DOE Office of Science user facility, provides a platform for researchers to prepare codes and workloads for Argonne’s upcoming Aurora exascale supercomputer. Polaris will also support several projects focused on using artificial intelligence (AI) for science and the integration of large-scale research instruments with high performance computing.

Built by Hewlett Packard Enterprise (HPE), Polaris is a 44-petaflops machine, meaning it can perform 44 quadrillion calculations per second.

“Polaris is around four times faster than our Theta supercomputer, making it Argonne’s most powerful computer to date,” said ALCF Director Michael Papka. “The system brings advanced capabilities that will allow our user community to carry out simulation, data analysis, and AI tasks at a scale and speed that has not been possible with our previous systems.”

“We have a very diverse set of projects lined up to use Polaris,” said Katherine Riley, ALCF Director of Science. “Some of the initial ECP and ESP research campaigns include using AI to accelerate cancer research, performing massive cosmological simulations to advance our understanding of the universe, and modeling turbulent flows to inform the design of more efficient aircraft.”

At Argonne, Polaris will also be a key tool to advance efforts to integrate ALCF computing resources more closely with DOE experimental facilities. Initial work will be focused on coupling ALCF systems with the co-located Advanced Photon Source (APS) and Center for Nanoscale Materials (CNM), both DOE Office of Science user facilities at Argonne.

“Experimental facilities need powerful computing resources to keep pace with the increasingly large amounts of scientific data they are producing,” Papka said. “By closely integrating ALCF supercomputers with the APS, CNM, and other experimental facilities, we can help speed data analysis and provide insights that allow researchers to steer their experiments in real time.”

Now that Polaris is available, researchers can apply for computing time through the ALCF’s Director’s Discretionary allocation program.

For details on the system, visit the Polaris user guide.