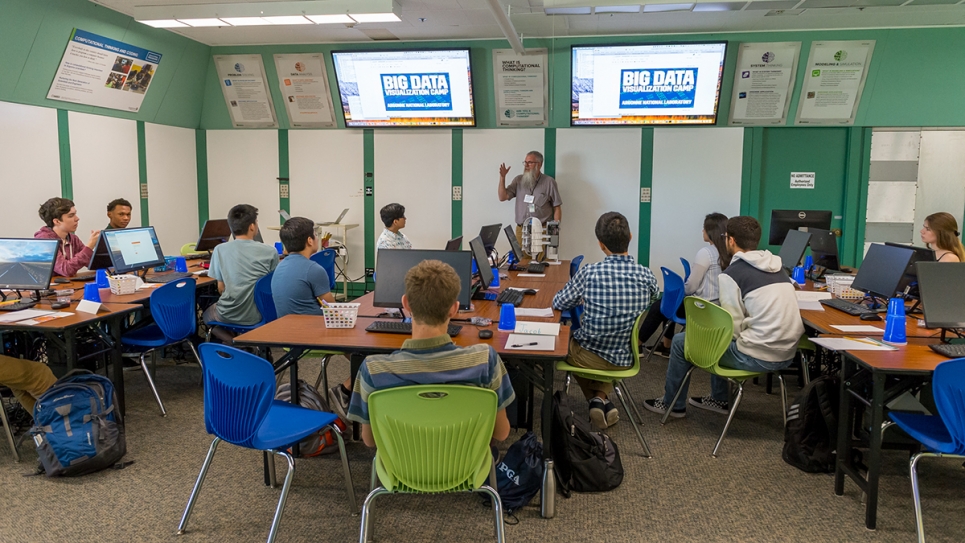 At Argonne National Laboratory’s Big Data Camp, a group of high school students got an opportunity to learn first-hand what it’s like to be a data scientist.

When you think of big data, 19th century London is probably not the first thing that comes to mind. However, for a group of high school students at the U.S. Department of Energy’s (DOE) Argonne National Laboratory, the connection is about to become quite clear.

It is the beginning of Argonne’s second annual Big Data Camp, and this year the campers will be working to determine the cause of an 1854 cholera outbreak using the power of data and visualization. Jointly organized by Argonne’s Educational Programs and Outreach group and the Argonne Leadership Computing Facility (ALCF), a DOE Office of Science User Facility, the camp connects the lab’s pioneering leadership in data and computing to a new generation of problem solvers.

The students participating in this five-day program will be honing their analysis skills while using data to solve real-world problems. With the help of visualization tools and the guidance of Argonne computer scientists, the high schoolers are embarking on a journey of data exploration and discovery.

But first, they’re stopping in London in the midst of a cholera outbreak. To start the week, the camp volunteers and a special guest—U.S. Representative Bill Foster—are acting as key figures from the time period. The students wander around the room asking the volunteers about the disease and other historical factors. This is part of the camp’s framework.

“This week we will use modern tools to solve a historical problem,” says John Domyancich, the learning center lead in Argonne’s Educational Programs and Outreach group. The students will work to determine the cause of the cholera outbreak by drawing parallels between historical London and modern-day Chicago. They will be studying data from the National Science Foundation-funded Array of Things, an Argonne-University of Chicago project that is collecting real-time data on Chicago’s environment, infrastructure, and activity using a network of more than 100 nodes that contain many environmental and air quality sensors located around the city.

Foster stopped by not only to join in on the opening activity, but also to speak to the campers about the societal impacts of data and computer science. The former physicist shared details on his own scientific journey, answered student questions and touched on where he thinks the future of science is headed. Hint: it involves big data.

Its rising presence is just why this camp is so important.

“The world is increasingly being represented in the form of data. Because of that, students really need an awareness of not only the whole range of data, but also where that data is coming from, what insights can you gain from it and how you can gain those insights,” Domyancich says. “We really felt that this camp was a good opportunity for us to bring in students that are interested in computer science and show them what you can actually do with it.”

As part of the first day, students take turns going around the room and sharing what they hope to gain from the Big Data Camp. Answers range from a desire to gain more programming experience to the hope of becoming a medical doctor. High school senior Juan David Campolargo is interested in applying the things he learns at camp “to create a business or solution to benefit people’s lives.” Another camper plans to study architecture, but is interested in the advantage this coding experience will give her.

Regardless of future plans, being comfortable with data will be useful. “Every field is being influenced by data,” says Michael Papka, director of the ALCF and one of the camp’s creators. “Having an understanding of how to use and analyze data is applicable to everything from science and health care to business and the humanities.”

This is just why student Alan Contreras signed up for the camp. Although considering studying physics in college, a previous computer science class piqued his interest. “The teacher was telling us how computer science and visualization would be important not only when working with computers but with all sorts of things,” he says. “I guess I’m just interested in seeing how it all works and learning more about the process of using this data.”

One of the primary goals of the camp is to teach high school students what can be done with data like that collected in Chicago, helping clarify the connection between data, science and its real-world application.

Another goal of the camp is to help students gain comfort when working with data, hopefully fostering an interest in data, visualization and computer science long after the camp ends. “We’re trying to break down the barriers of why computer science can be so intimidating,” Domyancich says. “That’s why we have several instructors, trying to give them as much support as we can. We’re able to say, ‘I know you’re frustrated right now, step away from it,’ because we’ve all experienced that too.”

This hands-on approach, combined with the work to solve real-world problems, aims to make computer science and the study of big data more accessible, ultimately preparing high schoolers for a future shaped by data.