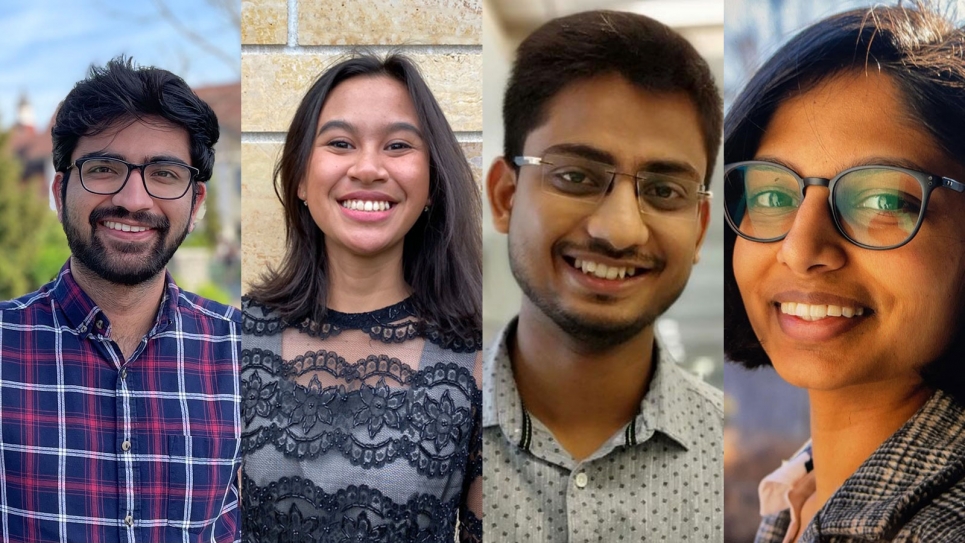 As part of the ALCF’s annual internship program, 33 college students were paired with mentors to work on real-world scientific computing projects.

“There’s no substitute for working with people in a lab,” said ALCF Director Michael E. Papka. “But we’ve tried to approximate the in-person mentorships, group meetings, and hands-on activities using the considerable tools we have on hand, to deliver valuable experiences for everyone involved—including the staff scientists who are mentoring these young investigators.”

“I really wanted to see if working in a large laboratory setting was a future direction I was interested in, and I found out it was,” said Sakarvadia.

For domain scientists and students, it can be challenging to use high-performance computing (HPC) resources, and many of them prefer accessing those resources using a web-based interface, such as a Jupyter Notebook, instead of a command-line interface.

“We implemented an in-situ workflow that allows data to be processed as it is being generated,” said Savira. “We ran the executable file containing MPI code in a separate notebook across multiple nodes of a computer cluster, and then piped the output into the same notebook and converted the data into numbers for subsequent analysis.”

Savira said she and her team plan to implement machine learning (ML) on the analysis part of their project, particularly in the area of feature tracking.
“This experience helped me make informed decisions on whether to pursue a PhD degree and gave me a taste of what a research process looks like,” said Savira. “Research is not a linear process. Feeling comfortable with uncertainties surrounding the process is necessary to remain calm and think clearly. Certainly, this experience granted me that.”

With the burgeoning number of ML and artificial intelligence (AI) applications in HPC, it is critical to have a unified platform that can store ML/AI models and datasets and related components to enable interoperability and to assist in pipeline development.

The HPC-FAIR framework significantly speeds the research of ML-based approaches for analyzing and optimizing scientific applications running on heterogeneous supercomputers. Verma is working to develop uniform representation to demonstrate data and AI-models to integrate into C++/Python applications, and to design and develop application programming interfaces (APIs) to load and save data sets and AI-models. These APIs will incorporate HPC and scientific ML workloads.

“I am looking forward to continuing my work with ALCF and to contribute my research capabilities in the best way possible,” said Verma. “This experience has motivated me to target higher avenues, including a PhD in computer science, that can contribute to the HPC and scientific community.”

Sakarvadia, who also studies computer science and mathematics at University of North Carolina at Chapel Hill, focused on constructing neural networks that optimize for peak FLOPs (floating-point operations per second) on a given architecture and measuring their impact on the performance of model convergence and prediction.

“I established a clear methodology to scale neural networks to enable improved hardware utilization and showed that my high-FLOPs networks had little to no degradation on model accuracy compared to their respective original networks,” said Sakarvadia, who plans to test her work on one or more ALCF GPU architectures next summer. “Overall, I learned many new strategies for how not to get stuck in my research process.”

Sahil Bhola, a recent graduate of University of Michigan’s aerospace engineering program, implemented a multi-fidelity environment to accelerate policy learning by using information from multiple environments. The idea was to spend more time learning on a source task which is relatively inexpensive and use the knowledge to support learning on the computationally expensive target environment. Bhola’s team leveraged the available distributed architecture via distributed learning to further accelerate policy learning by on-line policy sharing amongst RL agents.

“The idea of applying reinforcement learning techniques to fluid dynamics problems for specific controls and designs was really interesting to me,” said Bhola.

Assistant Computational Scientist Romit Maulik was already working on a similar project in Argonne’s Laboratory for Applied Mathematics, Numerical Software, and Statistics, so Bhola reached out to Maulik, who agreed to mentor his research.

“We decided to use a hierarchy of environments, and essentially a multi-fidelity approach, and execute those actions on a low-cost environment,” said Bhola. “We would then transfer the knowledge we gained from that environment to the next environment, thus improving our learning process.”