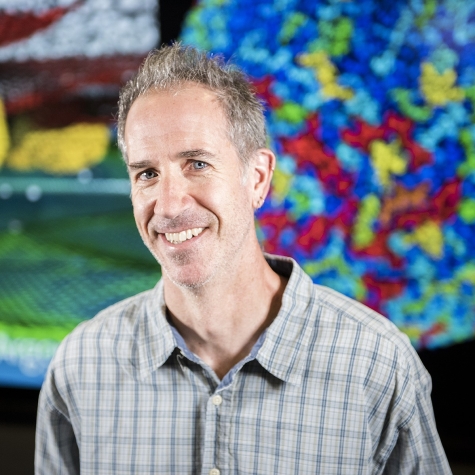 Joseph A. Insley is the Team Lead for Visualization and Data Analysis at Argonne National Laboratory’s Leadership Computing Facility (ALCF). His research includes the development of parallel and scalable methods for large-scale data analysis and visualization, both post hoc and in situ, on current and next-generation systems. He investigates the use of advanced display and interaction technologies, including immersive virtual and augmented reality environments, for the visualization and exploration of scientific data.

He and his team work closely with facility users from a wide range of scientific domains, developing cutting edge visualizations that provide insight into their large-scale simulation data. His visualizations have been used by his collaborators to disseminate their findings to both technical audiences and the public, as well as for outreach activities by the ALCF, Argonne, and the Department of Energy, including adorning the doors of ALCF’s supercomputers.

Insley is also an Associate Research Professor in the School of Art and Design at Northern Illinois University (NIU) where he teaches courses in data visualization and programming in the arts. Along with longtime collaborator and ALCF division director Michael Papka, he co-leads NIU‘s Data, Devices and Interaction Laboratory (ddiLab), founded by Papka, which brings together students from both the Department of Computer Science and the School of Art and Design in the pursuit of using computers to support and enhance knowledge and discovery, as well as artistic expression.

Insley has an MFA and an MS in computer science, both from the University of Illinois at Chicago. He has authored over 70 peer-reviewed publications, been an ACM Gordon Bell Finalist (Honorable Mention), received several Best Paper Awards, and won an R&D100 award. One of his crowning achievements is the appearance of one of his images on the cover of the international science journal Nature.