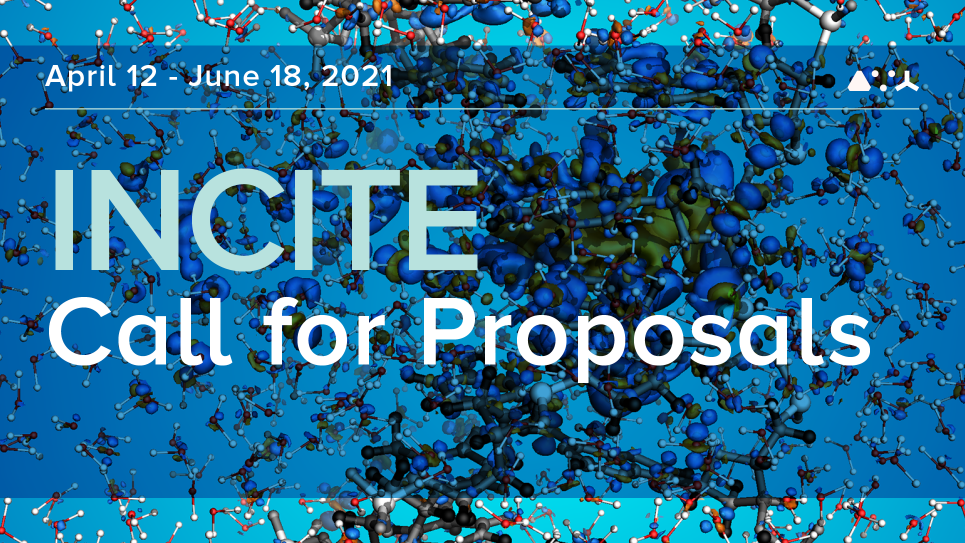 The INCITE program is aimed at large-scale scientific computing projects that require the power and scale of DOE’s leadership-class supercomputers.

The U.S. Department of Energy’s Innovative and Novel Computational Impact on Theory and Experiment, or INCITE, program is seeking proposals for high-impact, computationally intensive research campaigns in a broad array of science, engineering and computer science domains. The deadline is June 18, 2021.

“INCITE is the flagship program for the LCFs and it’s how we deliver on our mission to produce high-impact open science,” said Katherine Riley, INCITE’s project manager.

Riley serves as director of science at the ALCF and was one of the facility’s first hires in 2007, becoming a key contributor to its strategic vision while also assisting with the design and development of ALCF supercomputers. Judith Hill, INCITE’s previous project manager, joined Lawrence Livermore National Laboratory earlier this year.

Open to researchers from all institutions – including those from academia, industry and government agencies – the INCITE program focuses on large-scale scientific computing projects that require the power and scale of DOE’s leadership-class supercomputers. The program will award up to 60% of the allocable time on Summit, the OLCF’s 200-petaflop IBM AC922 machine, and Theta, the ALCF’s 12-petaflop Cray XC40 system.

In 2022, a new supercomputer will also be available to researchers for the first time: the ALCF’s Polaris, a GPU-accelerated system. DOE’s upcoming exascale resources, Aurora at ALCF and Frontier at OLCF, will be added to the 2023 INCITE program.

In addition to seeking traditional simulation-based projects, the call for proposals is open to projects that involve applications in the areas of data science, such as big data and data-intensive computing, and machine learning like deep learning, neural networks, discovery of patterns and reduced models for scientific data. Crosscutting proposals targeting the convergence of simulation, data and learning are also encouraged.

“We are looking for high-impact computational science proposals across the full gamut of scientific disciplines, home institutions and computational methodologies,” said ORNL’s Bronson Messer, who is OLCF’s director of science. “We are especially looking for proposals that – for whatever reason – cannot be carried out on any other resource in the world.”

Proposals will undergo a peer-review process to identify projects with the greatest potential for impact and a demonstrable need for leadership-class systems to deliver solutions to grand challenges. Additionally, applications will be evaluated for computational readiness to determine how effectively each proposed project will use the requested systems.

INCITE is also devoting 10% of its allocatable compute time in 2022 to a new Early Career Track. This program aims to encourage the next generation of high-performance computing researchers by focusing on principal investigators who are within 10 years of earning their doctorate degrees, on or after December 31, 2011. Applicants’ projects will go through the regular INCITE Computational Readiness and Peer Review process, but the INCITE management committee will consider meritorious projects in the Early Career Track separately.

To submit an application or for additional details about the proposal requirements, visit the INCITE website: doeleadershipcomputing.org.

UT-Battelle LLC manages Oak Ridge National Laboratory for DOE’s Office of Science, the single largest supporter of basic research in the physical sciences in the United States. DOE’s Office of Science is working to address some of the most pressing challenges of our time. For more information, please visit https://science.energy.gov.