Seventeen from Argonne recognized with Secretary of Energy’s Honor Awards 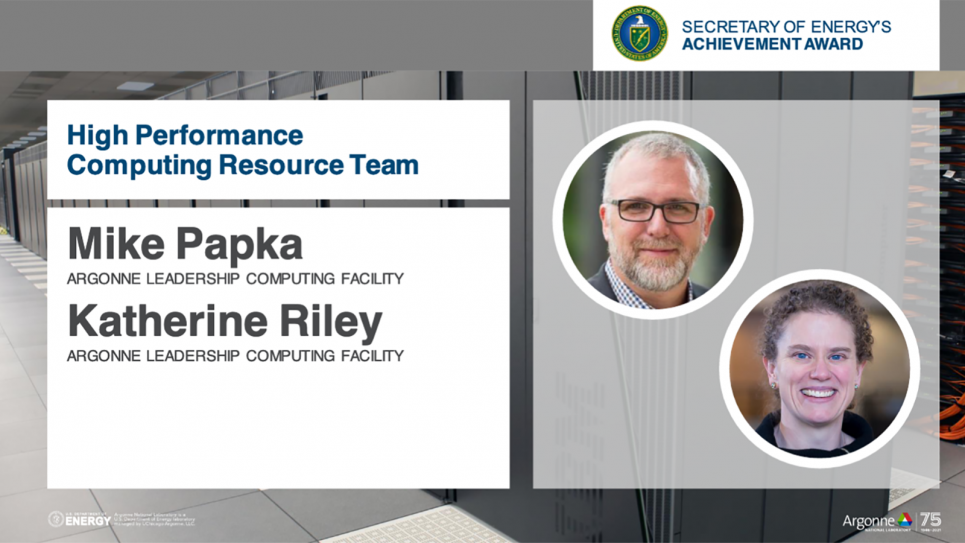 The ALCF's Mike Papka and Katherine Riley were part of the HPC Resource Team recognized with a DOE Secretary of Energy’s Achievement Award.

An ALCF team received the award for their efforts in mobilizing supercomputing resources to accelerate research into COVID-19.

Six groups that included 17 scientists, engineers and other staff from the U.S. Department of Energy’s (DOE) Argonne National Laboratory were recipients of the recently announced DOE 2020 Secretary of Energy’s Honor Awards.

“The Laboratory can be very proud. The number of Argonne researchers who earned this prestigious recognition from DOE, the Secretary’s Honor Awards, is more than double that of the previous year,” said Argonne Director Paul Kearns. ​“Congratulations to all the honorees and a special thanks to your research teams for their contributions to this impactful science. These achievements demonstrate the exceptional ways Argonne discoveries benefit the nation and contribute to the worldwide fight against COVID-19.”

For their help battling the COVID-19 pandemic, two groups with seven Argonne scientists were recognized.

Michael Papka, a senior scientist, deputy associate laboratory director for the Computing, Environment and Life Sciences (CELS) directorate and director of the Argonne Leadership Computing Facility (ALCF), and Katherine Riley, ALCF director of science, were recognized as part of the High-Performance Computing (HPC) Resource Team, which received a Secretary of Energy’s Achievement Award. They were part of the team that mobilized supercomputing resources to accelerate research into treatments and strategies to combat the pandemic.

Ilke Arslan, director of the Center for Nanoscale Materials (CNM) and the Nanoscience and Technology division; Andrzej Joachimiak, director of the Structural Biology Center (SBC) at the APS and co-director of the Center for Structural Genomics of Infectious Diseases; Charles ​“Chick” Macal, chief scientist for the Argonne Resilient Infrastructure Initiative; Rick Stevens, associate laboratory director for CELS; and Stephen Streiffer, deputy laboratory director for Science and Technology as well as interim associate laboratory director for Photon Services and interim director of the Advanced Photon Source (APS) were recognized as part of the National Virtual Biotechnology Laboratory Team, which received a Secretary of Energy’s Achievement Award. Their team helped characterize COVID-19 to assist with drug and vaccine development through the utilization of resources such as supercomputers, X-ray light, nanoscience research centers and biology facilities. The work was completed, in part, through three of Argonne’s DOE Office of Science User Facilities: ALCF, APS and CNM.

Four other groups that included ten Argonne scientists also were recognized with the Secretary of Energy’s Achievement Award.

Amgad Elgowainy, a senior scientist in the Energy Systems Division, was recognized as part of the Integrated Energy Systems Team. This group helped address considerations for hydrogen generation technology at nuclear reactors.

Yan Cao, principal nuclear engineer and Bo Feng, manager of reactor and fuel cycle analysis, both with the Nuclear Science and Engineering division, were recognized as part of the Spent Fuel Nondestructive Assay Project Team. The project focused on techniques to safeguard nuclear material.

Amanda Petford-Long, director of the Materials Science Division and Argonne Distinguished Fellow, was recognized as part of the Technology Risk Matrix Team. The team helped reduce the risk of malign foreign access to national labs.

Joe Adduci, manager of infrastructure and intelligence fusion in the Strategic Security Sciences division; systems scientists David LePoire and Sunita Kamboj and nuclear scientist Charley Yu in the Environmental Science division; Derek McLain, chemist in the Strategic Security Sciences division; and Helen Redmon, an environmental waste specialist in the Nuclear and Waste Management division were recognized for their work as part of the Seattle Response and Recovery and Cs-137 Joint Investigation Teams. Those teams provided emergency response and stabilization of a breached radioactive source event at the University of Washington’s Harborview Research and Training Facility.

Argonne congratulates the 17 awardees, whose contributions in 2020 accelerated U.S. prosperity and security.

About the Advanced Photon Source
The U. S. Department of Energy Office of Science’s Advanced Photon Source (APS) at Argonne National Laboratory is one of the world’s most productive X-ray light source facilities. The APS provides high-brightness X-ray beams to a diverse community of researchers in materials science, chemistry, condensed matter physics, the life and environmental sciences, and applied research. These X-rays are ideally suited for explorations of materials and biological structures; elemental distribution; chemical, magnetic, electronic states; and a wide range of technologically important engineering systems from batteries to fuel injector sprays, all of which are the foundations of our nation’s economic, technological, and physical well-being. Each year, more than 5,000 researchers use the APS to produce over 2,000 publications detailing impactful discoveries, and solve more vital biological protein structures than users of any other X-ray light source research facility. APS scientists and engineers innovate technology that is at the heart of advancing accelerator and light-source operations. This includes the insertion devices that produce extreme-brightness X-rays prized by researchers, lenses that focus the X-rays down to a few nanometers, instrumentation that maximizes the way the X-rays interact with samples being studied, and software that gathers and manages the massive quantity of data resulting from discovery research at the APS.