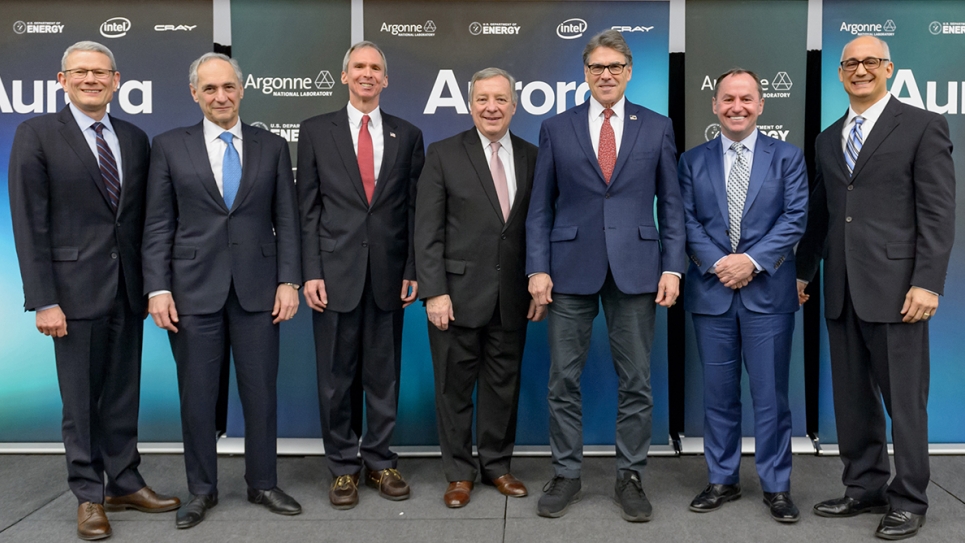 U.S. Department of Energy Secretary Rick Perry announced Monday that Argonne National Laboratory will be the future home of the nation’s first exascale computing system — a tool so powerful it will transform scientific research and discovery, especially as it relates to artificial intelligence.

Perry, who made the announcement from the laboratory, said his office is committed to the technology, which is expected to lead to breakthrough discoveries in cancer research, environmental science, medicine and national security, among countless other areas.

Aurora was born out of a partnership between the DOE and private industry, namely Intel Corporation and supercomputer manufacturer Cray Inc.

The contract is valued at more than $500 million and the system is expected to go live in 2021.

“This business of supercomputing is not for the meek,” Perry said. ​“It’s not for someone who is satisfied with the status quo. It’s a competitive field that we cannot fall behind in. That’s why we have committed to building three new exascale machines that will be 10 to 20 times faster than the fastest machines operating today. The first one we are going to build is Aurora.”

Aurora, he said, will allow scientists unprecedented access — and at a mind-bending speed — to information that will help them better understand the natural universe and all things in it.

Exascale computing and artificial intelligence ​“have the potential to transform every aspect of our world,” he said.

Laboratory Director Paul Kearns said Aurora will be able to do a billion billion (i.e., a quintillion) calculations per second — making it a million times faster than a high-end desktop computer.

Aurora will allow scientists to map all of the connections in the human brain, leading — potentially — to a reversal of traumatic brain injury and to the cure or prevention of Alzheimer’s disease.

“This type of computing power is not the stuff of science fiction,” Kearns said, adding that it can also be used to solve the mystery of dark matter. ​“We are on the cusp of achieving it today with the breakthrough of exascale computing.”

Robert Swan, CEO of Intel, said the announcement was important not only for those who built the system but for the public.

“Today marks a defining moment of our ongoing commitment to foster scientific innovation and to advance the United States’ technology leadership,” he said. ​“At Intel, we’re very excited and honored that a new Intel platform, designed specifically for the convergence of artificial intelligence and high-performance computing at extreme scale, will serve as the foundation of the Aurora exascale system.”

“While the importance of high-performance computing has long been recognized, we see more than ever the extraordinary possibilities for advances in science and business — with critical impact on national security, human health, the quality of human life and economic development,” he said.

Pete Ungaro, CEO of Cray, said his company was honored to help bring Aurora to fruition.

​“At Cray, the thing that gets us most excited to come to work every morning is that our systems, when placed in the hands of leading scientists and engineers, have an opportunity to change the world,” he said.

U.S. Senator Dick Durbin, too, is committed to making sure this type of project gets the funding it deserves so that the nation benefits from the work only a supercomputer like Aurora can accomplish.

“At the end of the day, what we are setting out to do is make sure the next generation has a fighting chance,” he said.