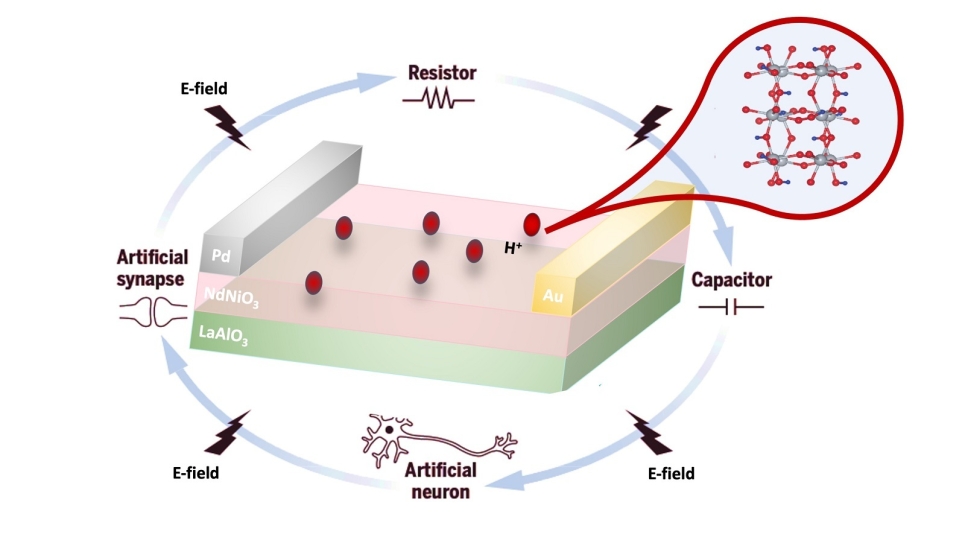 Hydrogen ions in the nickelate enable one of four functions at different voltages (applied by platinum and gold electrodes at top). The functions are artificial synapse, artificial neuron, capacitor and resistor. The capacitor stores and releases current; the resistor blocks it. (Image by Argonne National Laboratory.)

With help from ALCF computing resources, researchers developed a material with which computer chips can be designed to reconfigure their circuits when presented with new information.

What if computers could learn to reconfigure their circuits when presented with new information?

A multi-institutional team, including the U.S. Department of Energy’s (DOE) Argonne National Laboratory, has developed a material with which computer chips can be designed to do just that. It does so by mimicking functions in the human brain with so-called ​“neuromorphic” circuits and computer architecture. The team was led by Shriram Ramanathan, a professor at Purdue University.

“Human brains can actually change as a result of learning new things,” said Subramanian Sankaranarayanan, a paper co-author with a joint appointment at Argonne and the University of Illinois Chicago. ​“We have now created a device for machines to reconfigure their circuits in a brain-like way.”

With this ability, artificial intelligence-based computers could carry out complex tasks faster and more accurately, with much less energy expended. One example is in interpreting complex medical images. A more futuristic example would be autonomous vehicles and robots in space that could reprogram their circuits based on experience.

The key material in the new device consists of neodymium, nickel and oxygen and is referred to as a perovskite nickelate (NdNiO3). The team infused this material with hydrogen and attached electrodes to it that allow electrical pulses to be applied at different voltages.

“How much hydrogen is in the nickelate, and where it is, changes the electronic properties,” Sankaranarayanan said. ​“And we can change its location and concentration with different electrical pulses.”

“This material has a many-layered personality,” added Hua Zhou, a paper co-author and Argonne physicist. ​“It has the two usual functions of every-day electronics -- the turning on and blocking of electrical current as well as the storing and release of electricity. What’s really new and striking is the addition of two functions similar to the separate behavior of synapses and neurons in the brain.” A neuron is a single nerve cell that connects with other nerve cells via synapses. Neurons initiate sensing of the external world.

For its contribution, the Argonne team carried out computational and experimental characterization of what happens in the nickelate device under different voltages. To that end, they relied on DOE Office of Science user facilities at Argonne: the Advanced Photon Source, Argonne Leadership Computing Facility and Center for Nanoscale Materials.

The experimental results demonstrated that simply altering the voltage controls the movement of hydrogen ions within the nickelate. A certain voltage concentrates hydrogen at the nickelate center, spawning neuron-like behavior. A different voltage shuttles that hydrogen out of the center, yielding synapse-like behavior. At still different voltages, the resulting locations and concentration of the hydrogen elicit the on-off currents of computer chips.

“Our computations revealing this mechanism at the atomic scale were super intensive,” said Argonne scientist Sukriti Manna. The team relied upon the computational horsepower of not only the Argonne Leadership Computing Facility, but also the National Energy Research Scientific Computing Center, a DOE Office of Science user facility at Lawrence Berkeley National Laboratory.

Confirmation of the mechanism came, in part, from experiments at beamline 33-ID-D of the Advanced Photon Source.

“Over the years we have had a very productive partnership with the Purdue group,” Zhou said. ​“Here, the team determined exactly how atoms arrange within the nickelate under different voltages. Especially important was tracking the material’s response at the atomic scale to the movement of hydrogen.”

With the team’s nickelate device, scientists will work to create a network of artificial neurons and synapses that could learn and modify from experience. This network would grow or shrink as it is presented with new information and would thus be able to work with extreme energy efficiency. And that energy efficiency translates into lower operational cost.

Brain-inspired microelectronics with the team’s device as a building block could have a bright future. This is especially so because the device can be made at room temperature by techniques compatible with semiconductor industry practices.