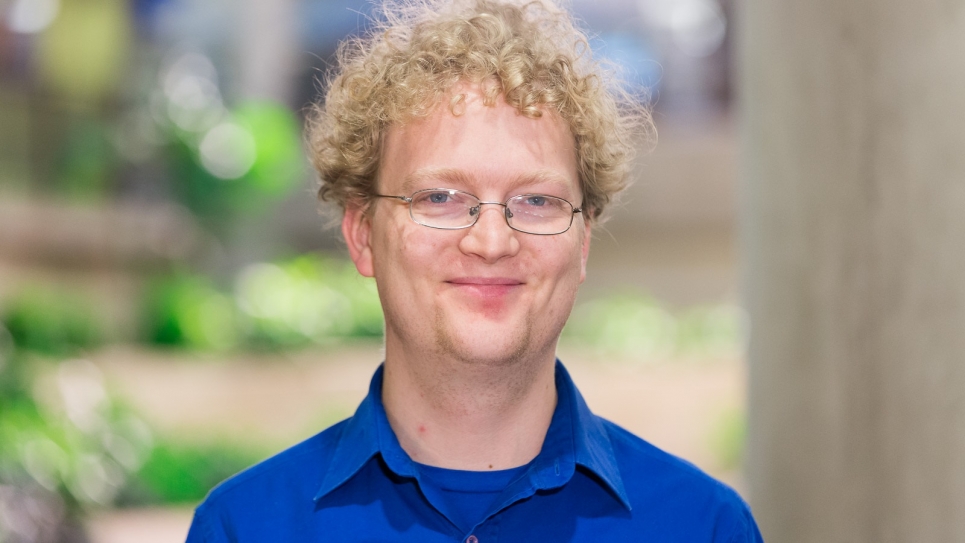 Corey Adams is an assistant computer scientist at the Argonne Leadership Computing Facility and a member of the Medium Energy group in Argonne’s Physics division. (Image: Argonne National Laboratory)

Adams, one of six Argonne scientists to receive a DOE Early Career Research award, was recognized for his neutrino physics research.

Now in its 12th year, the DOE’s Early Career Research Program awards each recipient with at least $500,000 per year for five years to advance their research. A program of the DOE Office of Science, the award bolsters the nation’s science workforce by providing financial support to exceptional researchers during their critical early-career years, when many create their most formative work.

Corey Adams is an assistant computer scientist at the Argonne Leadership Computing Facility, a DOE Office of Science User Facility, and a member of the Medium Energy group in Argonne’s Physics division. Originally a high energy physicist working on neutrino physics problems, he now works at the intersection of fundamental experimental physics and the application of deep learning and machine learning techniques to science problems — including neutrino physics — on high-performance supercomputers. He received the DOE award for his research on the construction of a background-free, normal-ordering neutrino-less double beta decay demonstrator.

Adams’ research was selected for funding by DOE’s Office of Nuclear Physics.

Melina Avila Coronado is an assistant physicist and experimentalist in the Low Energy group in Argonne’s Physics division. She joined Argonne in 2014 as a postdoctoral appointee after receiving her doctorate in physics from Florida State University and attained her current position in 2016. Her research centers on studying nuclear reactions to better understand the abundance of elements observed in nature and how they are formed in different stellar processes.

Avila Coronado’s research was selected for funding by DOE’s Office of Nuclear Physics, which will support her research in measuring key nuclear reactions for an astrophysical process known as the weak r-process.

Lindsey Bleem, an assistant physicist at Argonne, is also a member of the Kavli Institute for Cosmological Physics at the University of Chicago. Her research interests focus on constraining physical models of our universe through measurements of the cosmic microwave background (CMB) and galaxy surveys. Bleem’s award will support her work to maximize dark energy constraints from next-generation CMB cluster surveys.

Si Chen is a physicist at Argonne’s Advanced Photon Source (APS), a DOE Office of Science User Facility. Among other projects, she led the development of the Bionanoprobe, a hard X-ray scanning nanoprobe with cryogenic capabilities and the first instrument of its kind in the world. The DOE award will support Chen’s research in developing an innovative multiscale imaging platform that combines an X-ray nanoprobe and a plasma-focused ion beam.

Chen’s research was selected for funding by DOE’s Office of Basic Energy Sciences.

Sheng Di is a computer scientist in the Mathematics and Computer Science division at Argonne. His current research interests include lossy compression for scientific datasets, high-performance computing, scalable computing and fault tolerance. Dr. Di leads several data reduction projects funded by DOE and the National Science Foundation. He is the co-founder and key developer of the state-of-the-art lossy compressor SZ that serves important DOE applications in different fields: cosmology, quantum chemistry, crystallography, molecular dynamics and others.

Di’s award was selected for funding by the Office of Advanced Scientific Computing Research and will support his work on scalable dynamic scientific data reduction.

Xueying Lu came to the Argonne Accelerator Institute and the APS Accelerator Systems division as a joint faculty appointment with Northern Illinois University in 2020. The DOE award will support her work on innovative wakefield acceleration technologies at the Argonne Wakefield Accelerator.

Lu’s research was selected for funding by the DOE Office of High Energy Physics.

“These distinguished researchers are valued members of our diverse, world-class community of talent. They are making impactful new discoveries and delivering advanced technologies for our nation’s prosperity and security,” said Laboratory Director Paul K. Kearns. ​“Receiving this award from the U.S. Department of Energy represents a significant milestone in their careers, and their recognition is a distinct honor for us at Argonne.”