There are two schemes for distributed learning:

1)   Model parallelization: in this scheme, disjoint subsets of a neural network are assigned to different devices. Therefore, all the computations associated to the subsets are distributed. Communication happens between devices whenever there is dataflow between two subsets. Model parallelization is suitable when the model is too large to be fitted into a single device (CPU/GPU) because of the memory capacity. However, partitioning the model into different subsets is not an easy task, and there might potentially introduce load imbalance issues limiting the scaling efficiency.

2)   Data parallelization: in this scheme, all the workers own a replica of the model. The global batch of data is split into multiple minibatches, and processed by different workers. Each worker computes the corresponding loss and gradients with respect to the data it possesses. Before the updating of the parameters at each epoch, the loss and gradients are averaged among all the workers through a collective operation. This scheme is relatively simple to implement. MPI_Allreduce is the only communication overhead that introduced.

On Theta, we support data parallelization through Horovod. Horovod is an open source distributed deep learning framework developed by Uber. It is based on a bandwidth-optimal ring-allreduce algorithm proposed by Baidu “Bringing HPC Techniques to Deep Learning.” One could refer <https://eng.uber.com/horovod/> and https://arxiv.org/abs/1802.05799for a more thorough discussion of the detailed implementation and benchmarks.

We built Horovod module in the Cray programming environment on Theta using GCC/7.3.0.  It was linked to Cray MPICH library. This module could be loaded using "module load datascience/horovod-0.13.11". This module could NOT run on Login node/mom node. It must be run through "aprun -n ... -N ..." (mpirun does not work).

How to use Horovod:

The followings are the list of changes that one has to make changes to a Python script in order to run it using Horovod:

1.     Import Horovod and initialize it: "import horovod.PACKAGE as hvd; hvd.init()". PACKAGE could be tensorflow, pytorch, or Keras. After this initialization, the total number of ranks and the rank id could be access through hvd.rank(), hvd.size() functions.

2.     Scale the learning rate in the optimizer. Typically, since we use multiple workers, the global batch is usually increases n times (n is the number of workers). The learning rate should increase proportionally.

4.     Broadcast the model parameters from rank 0, so that all the workers will have the same starting point.

5.     Loading data according to rank ID: TensorFlow has some functions for parallel distribution of data. But for specific applications, the user might have to write their own data loader.

Specific instructions on how to make changes for different packages are shown on the respective documentations: TensorFlow, PyTorch.

In Horovod, once we increase the number of workers, the message is split into smaller and smaller chunks, which might be potentially limited by the latency effect. A tensor fusion approach was introduced to solve this issue. In the tensor fusion approach, smaller tensors are combined into a bigger reduction operation. There are two environmental variables that affect the performance:

Our benchmarks show that the default values for these two variablesare optimal on Theta.

Horovod has the ability to record the timeline of its activity, called Horovod Timeline <https://github.com/horovod/horovod/blob/master/horovod/common/timeline.h>.To record a Horovod Timeline, set the HOROVOD_TIMELINE environment variable to the location of the timeline file to be created. This file is only recorded on rank 0, but it contains information about activity of all workers.

One can then open the timeline file using

facility of the Chrome browser. Users can use Horovod Timelines to view exactly what each node was doing at each time step throughout a training job. This helps identify bugs and debug performance issues. 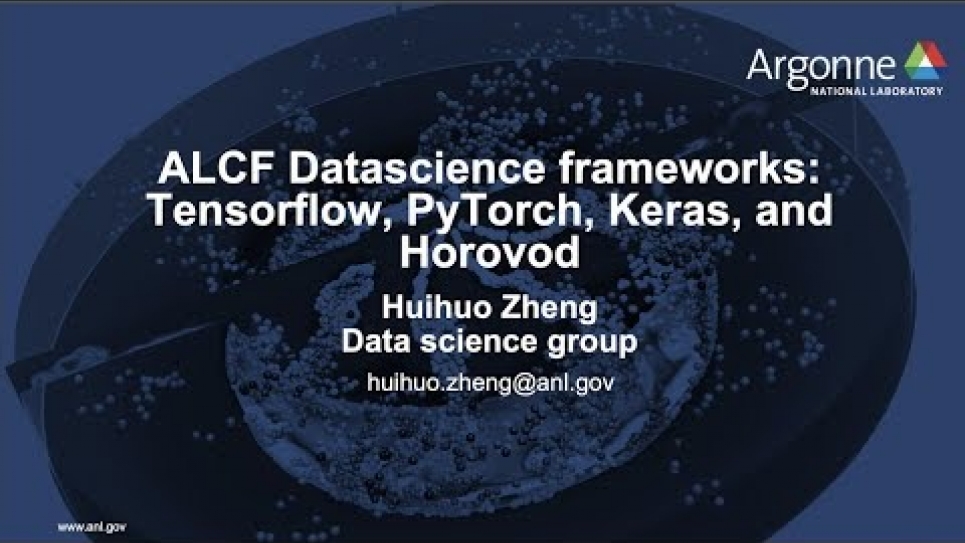 Deep Learning with Keras, Tensorflow, PyTorch, and Horovod on Theta