ATP and STAT on Theta

ATP and STAT are tools to debug abnormal program terminations such as segfaults.  ATP (Abnormal Termination Processing) monitors a program while it runs.  If the program crashes, ATP will invoke STAT (the Stack Trace Analysis Tool) to merge the stack backtraces of the application processes to an output file "atpMergedBT.dot".  This merged stack backtrace file may then be visualized using STAT's visualization tool, stat-view.

When you try to run you get a segfault.   After running, the job's stderr file (which defaults to $COBALT_JOBID.error) contains:

ATP and stat-view can be used to look into the segfault.

To use ATP, the ATP module should be loaded before linking your application . By default it is loaded on Theta, but to verify this, run module list, and check that the atp module is loaded.

Next, the environment variable ATP_ENABLED must be set in the job script to enable ATP.

Then start your program with aprun as normal.

If the program crashes, a atpMergedBT.dot should be produced, and the first process to die will write a stack backtrace to the job's stderr file (by default $COBALT_JOBID.error).  For the scenario, this would look like:

3. Looking at the output

The program stat-view (the Stack Trace Analysis Tool viewer) can be used to view the backtrace file atpMergedBT.dot, which shows what the program was doing at the time of abnormal termination. 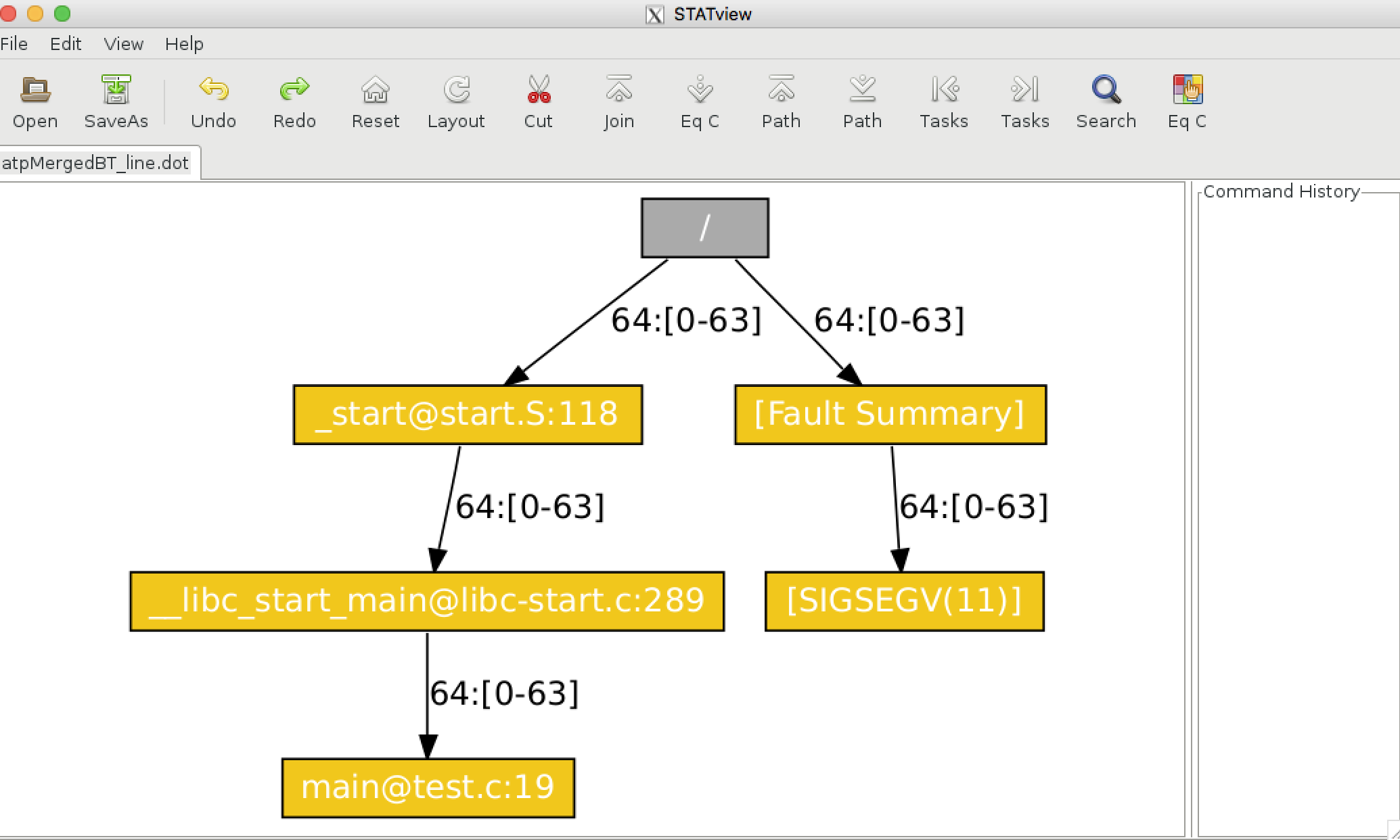 This shows that there is a segfault at line 19 of test.c, the test file. Each box is typically a function in a stack backtrace or a comment, denoted by brackets ( "[ ]" ) and discussed later.

Moving from top to bottom, following the arrows, follows a backtrace. The arrow connecting the boxes is labeled with how many ranks are active for the function, and which ranks. Here we see that for every function, 64 ranks were active, and they are ranks 0-63 (this makes sense since this was done with a single node, 64 rank job). If only a subset of ranks had had a segault, then the graph would label how many segfaulted and which ones.

Some of the boxes are not functions, but are comments, which is denoted by the use of bracket ("[ ]") in the name.  Here, the "[Fault Summary]" box is a summary tree saying that all 64 ranks, 0-63 faulted due to a SIGSEV.

To use stat-view, an X display will need to be forwarded from your local machine.  When you connect to the Theta login node, use the -Y or -X option to ssh:

Debugging and Profiling with DDT and Map (SDL Workshop 2019)

Debugging and Profiling with DDT and Map