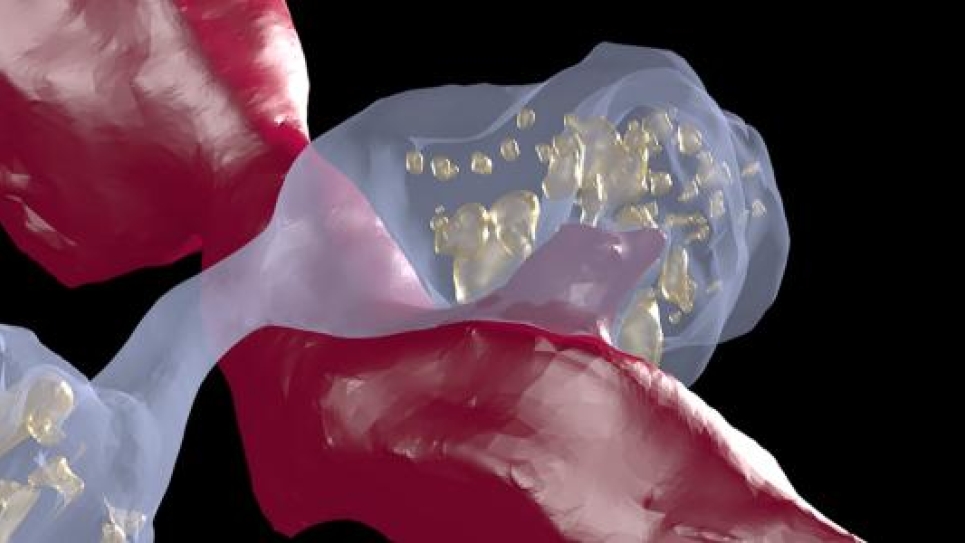 Researchers use advanced technology and mice to study dopamine neuron structure, addiction and the brain’s ability to recover.

A late 1980s commercial meant to combat drug addiction used a pair of frying eggs as a metaphor for the effects of drugs on the human brain. While researchers have long understood that there is a connection between drug abuse and adverse changes in the brain, it is only now that they can study, in fine detail, alterations that actually occur.

Using state-of-the-art technology, researchers from the University of Chicago and the U.S. Department of Energy’s (DOE) Argonne National Laboratory detailed, for the first time, specific changes that occur in the brains of mice exposed to cocaine.

The research provides new insights into the function of key dopamine neuron structures, which are Involved in multiple functions, from voluntary movement to behavior. The results turned the page on older questions regarding how dopamine is transmitted, while opening a new chapter on others. Through continued work, the researchers hope to understand how certain types of addictions work and, perhaps, develop targeted treatments.

In a recent paper published in the journal eLife, the researchers describe how they are building on the burgeoning field of connectomics, the development of highly detailed and accurate 3D maps of every neuron in the brain and their connections.

For their part, the team set out to more clearly identify the process by which dopamine is transmitted across neurons, as they don’t make conventional physical connections, where signals are transferred across synapses.

“Evidence suggests that these neurons dump dopamine into extracellular space, activating nearby neurons that possess dopamine sensing receptors,” says Gregg Wildenberg, a lead investigator on the project. ​“But connectomics has had little to say about these kinds of circuits because they don’t make typical connections, so we wanted to step into this area to see how it actually worked.”

Another motivation for the project was to understand dopamine’s involvement in addiction. What, if any, anatomical changes in dopamine circuits are caused by drugs of abuse, like cocaine?

Obtaining that level of detail required the employment of Argonne’s large volume, three-dimensional serial electron microscope. A high-powered microscope capable of visualizing the smallest details of the brain, it allowed for a more intimate look at the dopamine neurons from a selection of both cocaine sensitized mice and control animals.

Using resources at the University of Chicago, the team collected approximately 2,000 40 nanometer-thick sections (1mm = 1 million nm) from dopamine associated sections of the midbrain and forebrain.

From these samples, the SEM generated a collection of 2D, individual images — totaling over 1.5 terabytes of data. These were digitally reassembled using the visualization cluster, Cooley, at the Argonne Leadership Computing Facility, a DOE Office of Science user facility.

This process creates a 3D volume that allows researchers to identify and trace different anatomical features of the dopamine neurons, which, until recently, had proven something of a challenge.

“The leap of faith in this project was that we would actually be able to detect anatomical changes that might be happening at any point in the brain,” said Narayanan ​“Bobby” Kasthuri, a co-investigator on the project. ​“Could we take this microscopic slice of brain and find anything that’s quantitatively different? That is also part of the reason why we chose cocaine, because we thought whatever is happening is probably happening systemically throughout the brain.”

In general, they found that small swellings, or varicosities — sites responsible for releasing dopamine — could be classified into four different types based, in part, on the size as well as the amount of neurotransmitter carrying vesicles each varicosity contained. 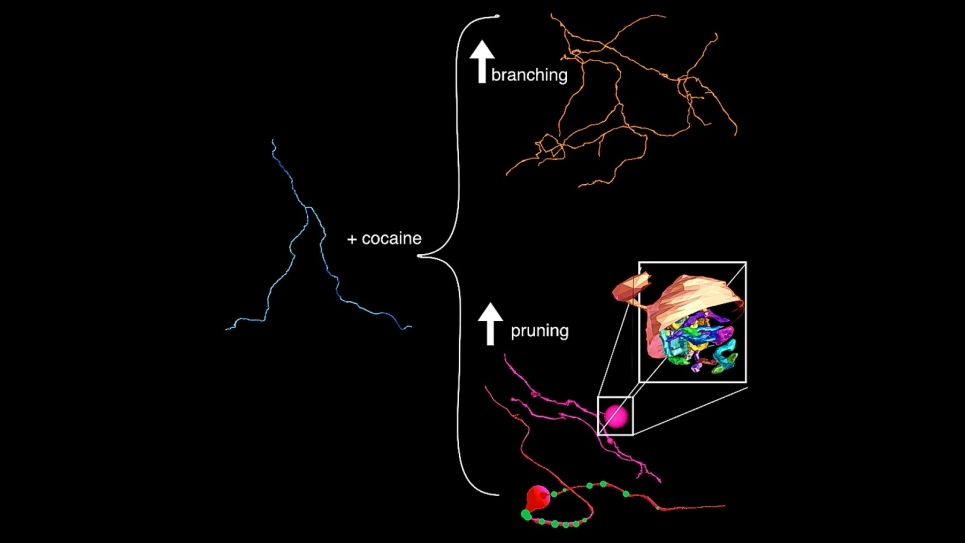 Some of these swellings, they found, were devoid of any vesicles, leading some critics to charge that they could not be defined as proper release sites. These empty varicosities, they say, likely indicate that there may be other molecular components, in addition to the presence of vesicles, that define dopamine release sites.

“We suggest that it’s possible that these empty varicosities have all the molecular machinery to release dopamine, but it may be that dopamine vesicles are being shuttled actively throughout the axon and we just happened to catch a snapshot in time where some are empty,” said Wildenberg.

The cocaine portion of the study yielded two major changes, both of which focus on axons, the ultrathin cables that project from neurons. Like trees, axons sprout tendrils that branch away toward other axons to deliver signals. After exposing the mice to cocaine, the team found an increase in that branching.

In a totally unexpected result, they also found that about half of the axons they studied formed huge swellings, or bulbs, at various locations along the axon. The nearest correlation to these bulbs appears in developing animals, at junctions where neurons meet muscle. In some cases, an axon retracts, or is pruned, and then swells up into a large bulblike structure.

The team saw signs of both sprouting and retracting, sometimes in the same axon. According to the researchers, the finding represents the first documentation of this behavior happening in the context of a disease model.

“Now we know that there is an anatomical basis to drugs of exposure,” noted Kasthuri. ​“These animals received one or two shots of cocaine and already, after two to three days, we saw widespread anatomical changes.

“It’s not like some molecules are changing here or there,” he added. ​“The circuit is rearranging much earlier and with much less exposure to the drug than anybody would have thought.”

While the study has helped elucidate questions of form, function and dynamics in the dopamine system, it also presents important new questions related to repeated exposure and addiction, as well as treatment and recovery.

Primarily, can the brain overcome the structural rearrangements introduced by addictive drugs, based upon its plasticity in other areas? Results from this research and accessibility to powerful tools of discovery hold the key to answering these types of questions in the future.

Research presented in this article was published in the Dec. 29, 2021, issue of eLife under the title, ​“Cell type specific labeling and partial connectomes of dopaminergic circuits reveal non-synaptic communication and large-scale axonal remodeling after exposure to cocaine.”

Funding for this research was provided by a technical award from the McKnight Foundation, an NIH BRAIN Initiative grant, and an NSF NeuroNex grant.