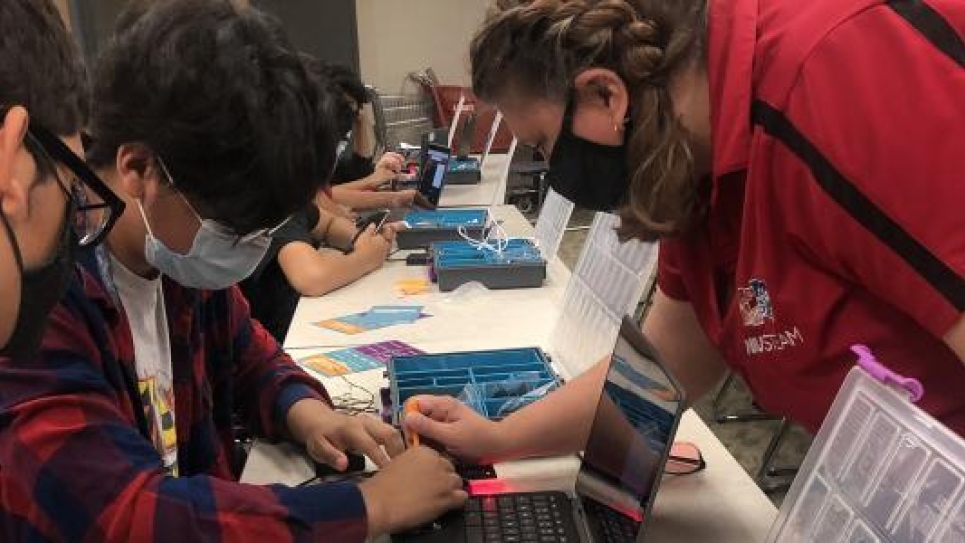 The term artificial intelligence, or AI, is used to describe everything from facial recognition technology used in airports to smart vacuum cleaners used in homes. But what is AI and how does it work? And how is it being used today to solve problems in science and engineering?

“AI will play a significant role in the lives of today’s students,” said Argonne Leadership Computing Facility (ALCF) director and NIU computer science professor Michael E. Papka, one of the AI summer camp’s originators. ​“This summer camp was an opportunity to first introduce fundamental principles of AI and then connect that knowledge with emerging methods of solving extremely complex problems.”

The learning experience was designed and implemented by a collaboration of staff and students from Argonne, NIU and the University of Illinois at Chicago.

“We set out to introduce students to the technical aspects of AI, and discuss the societal implications too,” said John Domyancich, Argonne Learning Center lead. ​“This technology can be trained to spot forest fires in images or greatly improve the diagnostic quality of CT scans, and has immense potential to solve big problems in science and society.”

Developers of the camp curriculum aimed to build a framework that gives students an authentic scientific research experience — one that both develops essential skills and has local relevancy or context. The camp first introduced broader concepts of AI and machine learning before connecting everyday uses of AI (cataloging and recognizing bird songs, for example) to how they can be used by researchers to solve extremely complex problems (scan for supernovae, find new life-saving drugs). The students then worked in groups to generate and analyze AI-generated datasets using the same professional analysis tools used by scientists on AI projects, including Juypter Notebooks.

In one activity, students learned how to identify the genre of a song using AI. After ascribing both subjective (danceability) and objective (tempo) features to a song, they then set out to build a computer model to identify the features and predict the song’s genre. The lesson explored how to train, test and validate an AI model, explore the resulting datasets, and determine how AI may be used to overcome data insufficiency to complete an investigation.

“This was about the students seeing themselves as scientists,” said Kristin Brynteson, who directs NIU’s STEAM (Science, Technology, Engineering, Arts, and Mathematics) program. ​“We wanted to help them discover a passion for this, and show them what is possible.”

Midway through the camp, the students began an exercise the instructors called ​“IKEA directions” for AI, where students attempted to break down all the pieces of AI and put them into simple instructions, much like the instructions that come with a piece of IKEA furniture.

“We wanted to translate the cutting-edge science that is happening at the lab into something that is relatable,” said Domyancich. ​“We were concerned that perhaps AI is too advanced of a topic to incorporate into a student camp, but we were surprised how deeply these students were thinking about AI, and how insightful and big picture their questions and concerns were.”

Overall, the organizers were pleased with the level of engagement and the collaborative nature of the inaugural Argonne-NIU AI camp and are working to expand student access to a diversity of technologies and real-time scientific data.

“We are exploring ways to establish spaces for students to research, share and collaborate, and integrate the use of AI into the discussion,” said Meridith Bruozas, manager of educational programs and outreach at Argonne. ​“Getting students to design and investigate their own research questions is the end goal.”

For now, the team is taking the lessons learned for the first AI camp to plan future activities aimed at increasing AI literacy among students. ​“This camp added to a growing number of experiences aimed at getting students interested in computer science and started in their pursuit of topics in AI and science,” said Papka.

“We were successful if the students left the camp with a better understanding of AI and wanting to know more,” concluded Brynteson. ​“If we effectively sparked that curiosity in them, I think we did what we set out to do.”

The ALCF is a DOE Office of Science user facility. The NIU Upward Bound program is operated by NIU’s Office of Precollegiate Programs with funding from the U.S. Department of Education.